Copyright: © 2022 KP. Bouter. This is an open-access article distributed under the terms of the Creative Commons Attribution License, which permits unrestricted use, distribution, and reproduction in any medium, provided the original author and source are credited.

Abstract
Metformin is the first-line drug in the treatment of patients with type 2 diabetes mellitus (T2DM). Unfortunately, gastrointestinal adverse events are common, with a prevalence ranging between 0-60 % and 11.4-16.1 % of the patients decide to stop treatment with metformin Immediate- Release (MIR) because of metformin intolerance (3-8). Some studies suggest that metformin Extended-Release (MER), could reduce gastrointestinal complaints.

The goal of this study is to investigate if a switch from MIR to MER (open label) could reduce gastrointestinal complaints. The Gastrointestinal Symptom Rating Scale (GSRS) was used to evaluate the change in gastrointestinal complaints. Patients with T2DM, who were using metformin for at least 4 weeks, with a GSRS-total score ≥ 29 were asked to convert their medication to MER at a dosage similar to that of their treatment with MIR. A total of 16 patients (mean age 59.8 years +/- 14.6) switched their medication from MIR to MER and completed the GSRS before the switch and 2 weeks after the switch. The mean GSRS-total score was 44.5 (+/- 10.0) during MIR which decreased to 28.4 (+/- 13.9) during MER (p < 0.001). Five clusters from the GSRS-questionnaire were specified and the HbA1c and fasting glucose parameters were tested before the switch (58.9 mmol/mol, 9.32 mmol/L) and 3 months after (61.9, 8,98 mmol/mol, 9.32 mmol/L; not significant). Using the GSRS, quantification in complaints is possible during metformin treatment and also when switching from MIR to MER. In this study, 14 of 16 patients continued treatment with MER (for at least 3 months).

Introduction
Metformin is a proven effective and safe drug in the treatment of patients with type 2 diabetes mellitus (T2DM). Due to its safety profile, low cost, beneficial effects on weight loss, and cardiovascular benefits, this drug is included as first-line therapy in virtually all international guidelines [1,2].

The main side effects of metformin are gastrointestinal which can often lead to serious forms known as metformin intolerance. Research into the prevalence of these complaints shows a large spread (0- 60 %) and 11.4-16.1 % of patients that start on metformin therapy decide to discontinue treatment because of these complaints [3-8].

Methods
Study population
Patients aged 18 years and older with T2DM who visited the outpatient clinic for internal medicine for routine check-ups in the period from 1 April to 30 September 2021 were asked to participate in the study. Those patients who were treated with MIR for at least four weeks were included in the study. In addition to metformin, they were also allowed to use insulin and/or other oral glucose-lowering agents.

This large variability in the reported prevalence of metformin intolerance is partly caused by the lack of an accepted definition and partly by the lack of standardization in the questionnaires used.

In clinical trials, it has been investigated whether metformin Extended-Release (MER) would cause fewer complaints than the use of metformin Immediate-Release (MIR) but these trials could not reach conclusive results [9].

In the present study, the change in complaints after an (open-label) switch in the treatment of MIR to MER was investigated using a standardized questionnaire: the Gastrointestinal Symptom Rating Scale (GSRS).

Patients recently treated for peptic ulcer disease were excluded from the study.

Gastrointestinal Symptom Rating Scale (GSRS)
The GSRS questionnaire consists of 15 questions grouped into five symptom clusters: abdominal pain, diarrhea, constipation, indigestion, and reflux. Each question is scored on the basis of a Likert scale of 1 to 7 where "1" stands for the absence of complaints and "7" for the highest severity or frequency (resulting in a total score of a minimum of 15 and a maximum of 105). The GSRS was completed during an interview with a trained researcher.

Data-analyses
The usual demographic data, a recent HbA1c value, and fasting glucose, as well as the glucose-lowering medication, were taken from the digital medical file. These data and the results of the GSRS scores were entered in SPSS, version 25. Linear data are represented as average +/- SD. Differences in qualitative values were tested for significance using the Chi-square test and those in continuous variables using the t-test (at a normal distribution) or the Mann- Whitney U-test (at a non-normal distribution).

Research design
Patients with a GSRS score of 29 or higher were asked to convert their medication to MER at a dosage similar to that of their treatment with MIR. In the 2nd week after the conversion, another GSRS questionnaire was completed. 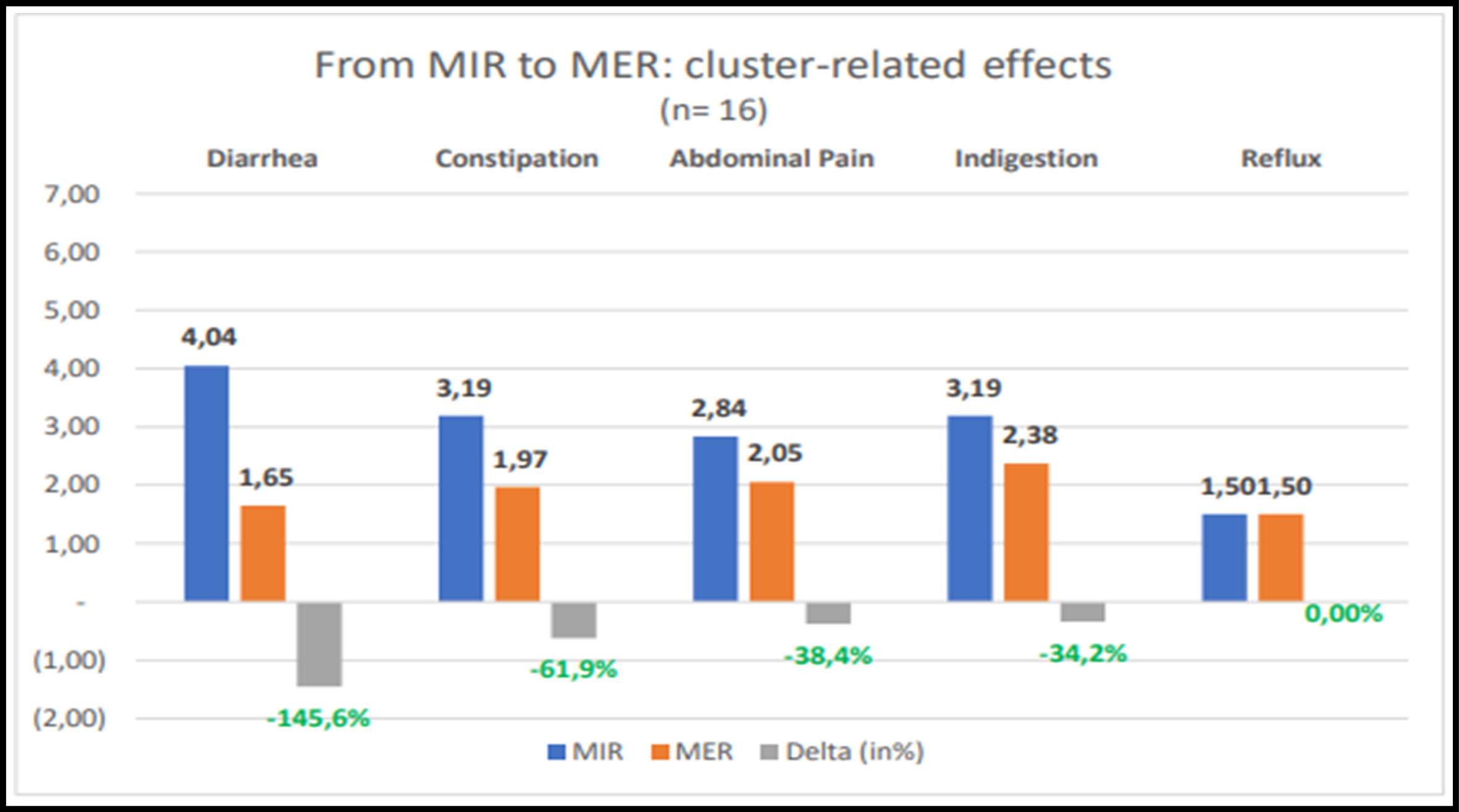 Discussion
Although there is no official definition of the concept of metformin intolerance, L.J. McCreight has suggested using this concept if patients decide to discontinue treatment after treatment taking 1000 mg metformin for up to 8 weeks [10]. Alternatively, metformin intolerance is also referred to if the dosage cannot be increased above 500 mg without the occurrence of gastrointestinal complaints. Both definitions are rarely used in research into metformin intolerance, and both have the disadvantage that cannot properly quantify the complaints. Especially the latter makes comparisons between international studies almost impossible. In this study, this quantification is possible with the use of the GSRS and, in addition, the improvement can also be quantified i.e. a decrease of points on the diarrhea cluster. This quantification also shows that improvement of the complaints occurred in 14 of the 16 patients. It is difficult to explain why this improvement did not occur in the remaining two patients. Most likely because both patients were using gliclazide in addition to metformin and this drug can also cause gastrointestinal symptoms. Finally, all patients who reported a reduction in complaints indicated that they wanted to continue treatment with MER. Although the GSRS is an internationally accepted standard in the study of a range of gastrointestinal disorders such as indigestion, reflux, irritable bowel syndrome and diarrhea, it is rarely used in the study of metformin intolerance. The GSRS questionnaire distinguishes itself by combining high test-retest reliability with internal consistency and validation in various international study populations [11-15].

Although a recent meta-analysis could not show a clinically relevant difference in gastrointestinal adverse reactions when using MIR or MER, cohort studies with longer follow-up and larger numbers of patients in the analysis did show higher adherence when using MER than when using MIR [16,17]. The results suggest that the use of the GSRS in comparative research may shed light on this dilemma.

The drawback of this study is its open-label design, which encourages suggestiveness, and the small size of the study population. However, the results themselves deserve to be confirmed in a double-blind study with a larger number of patients included.