Copyright: © 2022 Şenay Kurtulus MD. This is an open-access article distributed under the terms of the Creative Commons Attribution License, which permits unrestricted use, distribution, and reproduction in any medium, provided the original author and source are credi

Introduction
Pediatric inguinal hernias are congenital and classified as indirect hernias based on the pathophysiology of the persistent processus vaginalis, which is associated with an increased risk of inguinal hernias in preterms. The incidence of inguinal hernia in children is 1- 5 %, and this rate may increase up to 30 % in premature babies. Approximately 60 % of inguinal hernias are right-sided, 30% are left- sided, and 10 % are bilateral. Boys are much more likely to have a hernia, with male-female ratios between 3:1 and 10:1 [1-3].

Case Reports
While the preterm baby was being followed up in the neonatal intensive care unit, he was consulted to the pediatric surgery department because of painful swelling in the right scrotum. It was stated that there was no swelling suggestive of a hernia since birth in the patient who was born at 28 weeks of gestation and had a very low birth weight (1000 gms). At the presentation, the baby with a postconceptional age of 36+2 weeks and a bodyweight of 1750 grams was restless and crying constantly. On physical examination, the right scrotum was edematous and tender.

In the ultrasonographic examination performed with the preliminary diagnosis of incarcerated inguinal hernia, herniated bowel loops were seen through a 4 mm defect from the inguinal canal to the right scrotal sac, and there was no peristaltic activity with increased echogenicity of the intestinal wall. With color Doppler, no obvious vascularity was observed in the intestine, and the proximal intestinal loops were dilated, thus these findings suggested strangulation.

With the diagnosis of an incarcerated hernia, he was taken to emergency surgery after the manual hernia reduction attempt failed. Thus, there was intestinal ischemia (Figure 1), but intestinal resection was not necessary, and the right testis circulation was also impaired (Figure 2). Following the application of warm saline, the intestinal circulation was restored and herniated loop was replaced in the abdomen along with high ligation of the herniated sac. The patient recovered completely after the operation. In the control ultrasonography 3 weeks later, the volume, shape, and parenchymal echogenicity of the affected right testis were similar to the contralateral normal testis, indicating that testicular atrophy did not develop. 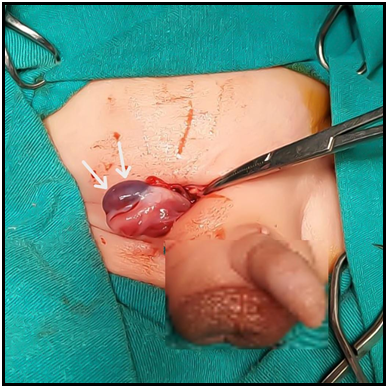 Figure 2: The purple appearance of the ischemic testis during the operation (white arrows).

Discussıon
The increase in survival rates of preterm infants with the contribution of advanced neonatal intensive care units is one of the reasons why inguinal hernia is more common in premature infants. Inguinal hernias often occur in the first year of life, and inguinal hernia repair is the most common surgical procedure performed by pediatric surgeons, and approximately one-third of children are younger than 6 months of age when they are operated on [1].

Management of inguinal hernia and timing of surgery is difficult in newborns with a hernia, especially in premature [5]. Hernia repair in premature infants is usually delayed until a certain weight or age is achieved in order to minimize the complications that may develop due to anesthesia, surgical technical difficulties, and comorbidities due to prematurity [6]. On the other hand, it is known that more than half of the premature with an inguinal hernia have been incarcerated, and the risk of incarceration doubles when the repair is delayed beyond 40 weeks of postconceptional age [6,7].

Although most pediatric surgeons prefer inguinal hernia repair before discharge, we think that even waiting until discharge from the hospital may increase the risk of unnecessary incarceration and therefore it should be operated on as soon as the diagnosis is confirmed [9,10].

Conclusion
The optimal timing for inguinal hernia repair in premature infants is important in balancing the risks of surgery and respiratory complications against complications such as strangulation. Inaddition, it should be kept in mind that the first appearance of an inguinal hernia may be by incarceration and should be considered in the differential diagnosis of sudden onset painful scrotal masses.

Consent for publication: Official consent received from the patinet.