Copyright: © © 2021 Luiz Eduardo Imbelloni. This is an open-access article distributed under the terms of the Creative Commons Attribution License, which permits unrestricted use, distribution, and reproduction in any medium, provided the original author and source ar

Abstract
Background: Fractures of the leg bones are not common in the elderly population in Brazilian Health System during 10 years of study. Most fractures are extremely complex. Peripheral nerve blockade is an alternative method of pain control to opiods. This case illustrates the use single shot combined lateral femoral-sciatic nerve block for analgesia.

Case report: A 87-year-old male with fractures to the right leg bones presented for removal of tibial intramedullary nail and placement of Ilizarov external fixator under spinal anesthesia. At the end of the procedure, access to the lateral femoral and sciatic nerve block was achieved by using a stimulator connected to a 150 mm needle, and 0.2% bupivacaine. Postoperative analgesia lasted more than 30 hours with no side effects, without the need to rescue analgesia.

Conclusion: The use of a femoral and sciatic nerve peripheral block offered an alternative to conventional pain control with morphine. Analgesia was performed with single shot combined lateral femoral-sciatic block with 0.2% bupivacaine provides more than 30 hours of analgesia without side effects.

Introduction
Diaphyseal fractures of the tibia are one of the most common, representing about 2 % of all fractures and 40 % of long bone fractures in adults, this was mainly evident among younger patients [1]. Fracture after falling has been identified as an important problem in public health [2]. The first treatment choice consists of fixing an intramedullary nail, which shows the best result in the patient's functional recovery [3]. Blocking the sciatic nerve with the neurostimulation technique provides longer duration of the analgesic, less side incidence effects, greater incidence of satisfaction when compared to two different doses of intrathecal morphine [4]. Lumbar plexus block when combined with sciatic nerve block is a safe and effective alternative for analgesia in lower limb surgery. A lateral approach to sciatic–femoral block combined via a single skin injection was recently described [5] and used for continuous analgesia with an infusion of 0.1 % bupivacaine via an elastomeric pump is a safe and effective procedure in adults for surgical treatment of tibia fractures by intramedullary nailing [6].

The objective of this case is to report the use of combined femoral- sciatic block by one route in the fourth complex fracture surgery of the right leg bones in an elderly patient, with analgesia lasting more than 24 hours.

The first surgery was performed after an accidental with bilateral fracture of the forearm with osteosynthesis and an external fixator and the right leg also with an external fixator (Figure 1). Nine days later, the external fixator of the leg was removed, and the tibia was operated with a intramedullary tibial nail, being discharged to residence two days later (Figure 2). About a month later, he was re-admitted with a surgical site infection on his right leg and a surgical lavage was performed. The three previous surgeries were performed with spinal anesthesia with hyperbaric bupivacaine associated with morphine for postoperative analgesia and the need for a bladder catheter. Four days after he was admitted to the fourth surgery being removed the intramedullary tibial nail and placed Ilizarov fixative, which we now describe. 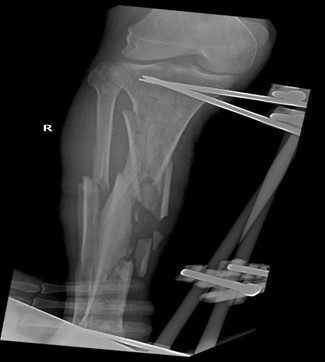 After discussion with patients and family members and obtaining the Free and Informed Consent Form, it was proposed to perform spinal anesthesia for surgical treatment and combined lateral femoral- sciatic block for postoperative analgesia [5]. The blood counts the day before the surgery showed red blood cells of 2,460,000/mm3, hemoglobin of 6.9 g/dL, hematocrit of 22.1 %, and no signs of infection (leukocytes of 4,800/mm3). The prothrombin time was 12.8 seconds, the prothrombin activity was 84.1 % and the INR was 1.07. Sodium plasmatic 134 mEq/L, potassium 4.8 mEq/L potassium and creatinine 1,4 mg/dL, ionic calcium of 5,2 g/dL, and total bilirubin and fractions within the normal range.

The preparation room for surgery after monitoring and venipuncture with 18G extracath, opted for the administration of red blood cell concentrate and 500 mL of 6 % hydroxyethyl starch and after referring to the operating room. In the operating room, sedation was performed with 0.5 mg of midazolam and 7.5 mg of dextroketamine for placing in the sitting position and performing spinal anesthesia. After asepsis and antisepsis with 0.5 % chlorhexidine, a subarachnoid puncture was performed through the median route with a 25G Quincke needle between the L3-L4 intervertebral spaces, injected 15 mg of 0.5 % isobaric bupivacaine after confirmation of the cerebrospinal fluid (CSF). Fifteen minutes after the sensory level was T8 and a complete motor block of the lower limbs.

The surgery lasted 165 minutes, with blood loss estimated at 514 mL measured by weighing compresses. During the procedure, it was decided to transfuse another bag of red blood cell concentrate, totaling two bags, during the procedure Voluven® 6 % 500 mL and saline 0.9 % 500 mL. No bladder catheter was used.

With the patient supine, a new lateral combined femoral-sciatic nerve approach was performed via a single skin puncture, with a single 150 mm insulated needle connected to an HNS 12 Stimuplex® stimulator (0.1 msec stimulus at 2 Hz frequency with an initial current intensity of 0.5 mA) was inserted at the point of the needle [5]. The needle was advanced medially from the lateral thigh until the movement of the quadriceps and patella related to the femoral stimulation; then, 20 ml of the 0.2 % bupivacaine anesthetic solution was injected. The needle was removed until the subcutaneous tissue and redirected posteriorly and caudally to reach the sciatic nerve, identified by stimulation of the common fibular nerve or tibial nerve, confirmed by movements of the foot; then, 30 mL the same anesthetic solution was injected.

The patient was transferred to the Intensive Care Unit (ICU), despite remaining hemodynamically stable throughout the procedure. Post-anesthetic visits were made during hospitalization, in which the patient denied pain complaints after 1, 7, 12, 24, and 30 hours after the anesthetic intervention. He had motor strength grade 4 in the left lower limb and grade 2 in the right lower limb, 7 hours after anesthesia. After 24 hours of anesthesia, he had grade 4 motor strength in both lower limbs and remained with decreased sensitivity in the operated leg. For 30 hours, no rescue drug was needed for postoperative analgesia.

Discussion
Regional anesthesia may provide better analgesia while decreasing opioid-related side effects. In the first three surgeries, analgesia was performed with spinal morphine, requiring the use of a bladder catheter. In the fourth surgery, analgesia was performed with a combined lateral femoral-sciatic block with analgesia remaining for more than 30 hours, without the need for a bladder catheter. The use of a catheter on both nerves and an infusion of 400 ml in an elastomeric pump provided 40-hour analgesia [6]. Unfortunately, in this patient, it was not possible to use the set for continuous blocking and neither the elastomeric pump because it is not part of the hospital's therapeutic arsenal.

The lateral entry into the thigh with a 150 mm needle allows access to the femoral nerve before reaching the femoral artery. Perpendicular redirection and 6 cm below the greater trochanter reaches the sciatic nerve after touching the femur bone. Both nerves were accessed with a neurostimulator and the use of 0.2% bupivacaine provided analgesia for more than 30 hours. Certainly, the lateral entry to both nerves reduced the pain, facilitating movement and allowing personal hygiene.

The management of fractures in the elderly population is currently becoming a major public health issue, given the increasing life expectancy   [7,8].   In         the   geriatric   population,   the   fracture mechanism is usually a simple fall from own height [9]. The standard treatment options for these fractures include intramedullary nailing or plate osteosynthesis [10]. The use of intramedullary nailing of tibial shaft fracture aged 41.5 years, with a range of 14– 86 years [1]. Studying 225 patients over 65 years of age for a period of 10 years showed that mortality is equal to the mortality of the fracture of the hip, and therefore these patients should receive the same level of care and prioritization as patients suffering such an injury [11]. This case reports the severity of the fracture of the bones of the elderly patient's right leg where several surgeries were necessary, using two types of external fixation and intramedullary nailing of the tibial.

The incidence of these fractures in elderly patients, decreased during these 10 years of the study, nearly halving in number [11]. This fact was observed during a period of ten years in a hospital of the Brazilian Health System, where we practically only observed hip fractures, in 15 articles published with 1,226 elderly patients with hip fracture. [7]. With a reduction in the preoperative and postoperative fasting time, a decrease in the number of suspensions of surgery, a decrease in-hospital stay, a reduction in costs. Only recently did we have this serious case of fracture of the bones of the right leg in an 87-year-old male patient, having undergone four surgical procedures, due to the severity of the fracture of the bones of the right leg.

Intrathecal opioids are used routinely in various countries for intra- and postoperative analgesia, and in the United Kingdom, this technique is used in 88.4 % of the surgery services [12]. The analgesic effects of intrathecal morphine can persist for several hours. Moreover, nausea, vomiting, pruritus, and urine retention can occur. Comparing the dose of morphine with sciatic nerve block for analgesia from surgeries below the knee, reducing the dose from 100 μg to 80 μg resulted in less time for analgesia, and with the incidence of urinary retention 37.5 %, itching 55 %, and nausea and vomiting 25 %. [4]. The single-shot sciatic nerve block with neurostimulator and 0.25 % bupivacaine provided 20-hour analgesia [4].

Effective postoperative analgesia reduces the incidence of postoperative complications, decreases hospital stay, increases patient satisfaction, and decreases costs. In conclusion, unlike the three previous surgeries when analgesia was performed with spinal morphine and the use of a catheter bladder, in the present case report analgesia was performed with combined lateral femoral-sciatic block and lasting more than 30 hours, without the need for a bladder catheter.