Copyright: © 2022 Devraj Kandel. This is an open-access article distributed under the terms of the Creative Commons Attribution License, which permits unrestricted use, distribution, and reproduction in any medium, provided the original author and source are credited.

Abstract
Introduction:
Rasmussen Encephalitis is a rare, chronic inflammatory condition of the brain mostly affecting children and involving one cerebral hemisphere. The most common presentation is a chronic intractable seizure with the diagnosis being made on MRI as a part of a comprehensive neurological or seizure work-up.

Imaging findings: CT and MRI of the brain show an atrophied left cerebral hemisphere including head of left caudate nucleus with dilatation of ipsilateral lateral ventricle.

Discussion: First diagnosed in 1958, Rasmussen encephalitis is yet to find the complete curative treatment. Development of advanced imaging modalities have facilitated the diagnosis. Surgical excision is the modality with promising results however in expense of permanent hemiparesis after hemispherectomy.

Conclusion: In a patient presenting with typical clinical history and imaging findings of unilateral cerebral atrophy (peri-sylvian region) and atrophy of basal ganglia (head of caudate nucleus), Rasmussen encephalitis should be considered. 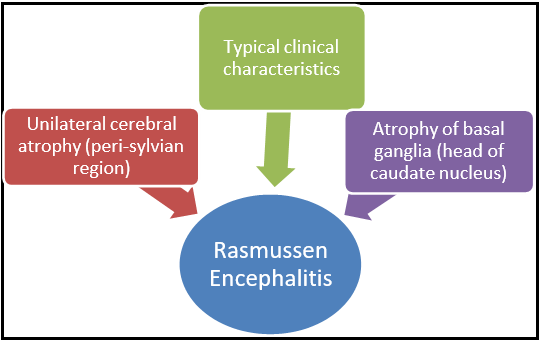 Introduction:
Rasmussen Encephalitis is a rare, chronic inflammatory condition of the brain mostly affecting children and involving one cerebral hemisphere.[1] It is most common in children below 10 years of age with rare instances seen in adolescents and young adults. The most common presentation is a chronic intractable seizure with the diagnosis being made on MRI as a part of a comprehensive neurological or seizure work-up. Some cases may present with hemiparesis, neurological deterioration, or loss of speech or motor skills.[2] We present an 18-year-old male, who presented to the department of neurosurgery, Bir Hospital with a progressive seizure disorder.

Clinical history:
The patient had initially developed seizures 5 years back and had been on anti-epileptics. For the last 3 months, the frequency of seizures had increased with one to three episodes daily even with regular intake of anti-epileptics for which the patient was brought our to hospital.
The patient's family also complained of progressive right-sided hemiparesis in the child and deterioration in his cognitive functions. Past history of high grade fever with hospitalization for 14 days at the age of 9 months is present.

These imaging findings support the diagnosis of Rasmussen Encephalitis.

Figure ‘a’ and ‘b’ are non-contrast CT head axial images showing an atrophied left cerebral hemisphere including head of left caudate nucleus with dilatation of ipsilateral lateral ventricle.

Differential diagnosis:
For the given imaging characteristics, the common differentials are;

Discussion
First diagnosed in 1958, Rasmussen encephalitis is yet to find the complete curative treatment. In this era of high resolution CT and MRI, number of cases being diagnosed have increased. The imaging findings depend on the stage of the disease that are- prodromal, active, and chronic stages.4,5 Initially, there may be unilateral localized cortical edema. T2/FLAIR hyperintensity develops over time in the affected side's cortex and subcortical white matter. Unilateral cerebral and basal ganglia atrophy is evident as the disease progresses into the chronic phase. [4,5] Predilection for peri-sylvian cortex is seen. In our case, there is involvement of peri-sylvian cortex with atrophic brain changes suggesting the late stage of the disease. In cases with uncontrolled seizures, surgical excision of the involved half of cerebral hemisphere has been seen promising in terms of controlling the seizures and halting further deterioration of cognitive functions[6,7]. However, permanent hemiparesis is inevitable and the beforehand documentation of hemiparesis is advised. In our case however, patient refused to undergo surgery with high risk consent and chose to stay on anti-epileptics as for now.

Conflict of interest: None declared

Patient consent: Informed written consent has been taken from the parent of the child by me, the principal author and can be reproduced as and when required.