Copyright: © © 2021 Menka Kapil. This is an open-access article distributed under the terms of the Creative Commons Attribution License, which permits unrestricted use, distribution, and reproduction in any medium, provided the original author and source are credited.

Abstract
Plasma cell leukaemia (PCL) is a rare neoplasm and is the most aggressive form in the spectrum of multiple myeloma. It is classified as primary or de novo and secondary in patient of multiple myeloma. Organomegaly and bleeding tendency are common in primary PCL and less in secondary as in our case. Osteolytic lesions are seen less frequently in Plasma cell leukaemia. The diagnosis is made by an emphasis on the morphological appearances and confirmation by serum electrophoresis and immunophenotyping. In our case the presence of plasma cells in peripheral blood was more than 20 % in young patient at the age of 34 years which is very rare and is further confirmed by immunophenotyping.

Case Report
A 34-year-old male with complaints of general malaise, rashes, fatigue, and fever in the last month was admitted to our hospital. He had no history and family history of diabetes and hypertension.He was a non-smoker and non-alcoholic. On examination, hepatosplenomegaly, palpable purpura, and plaques were present mainly on both lower limbs.

Figure 1: Purpura at lower limb as shown by arrow.

The hemogram showed normochromic normocytic anaemia of 6.9 g/dL, leucocytosis of 96.58×10 9/L and thrombocytopenia of 76×109/L, with finding of 69 % cells that are plasma cells with eccentric nucleus, sieve like chromatin, basophilic cytoplasm as shown in figure 2. 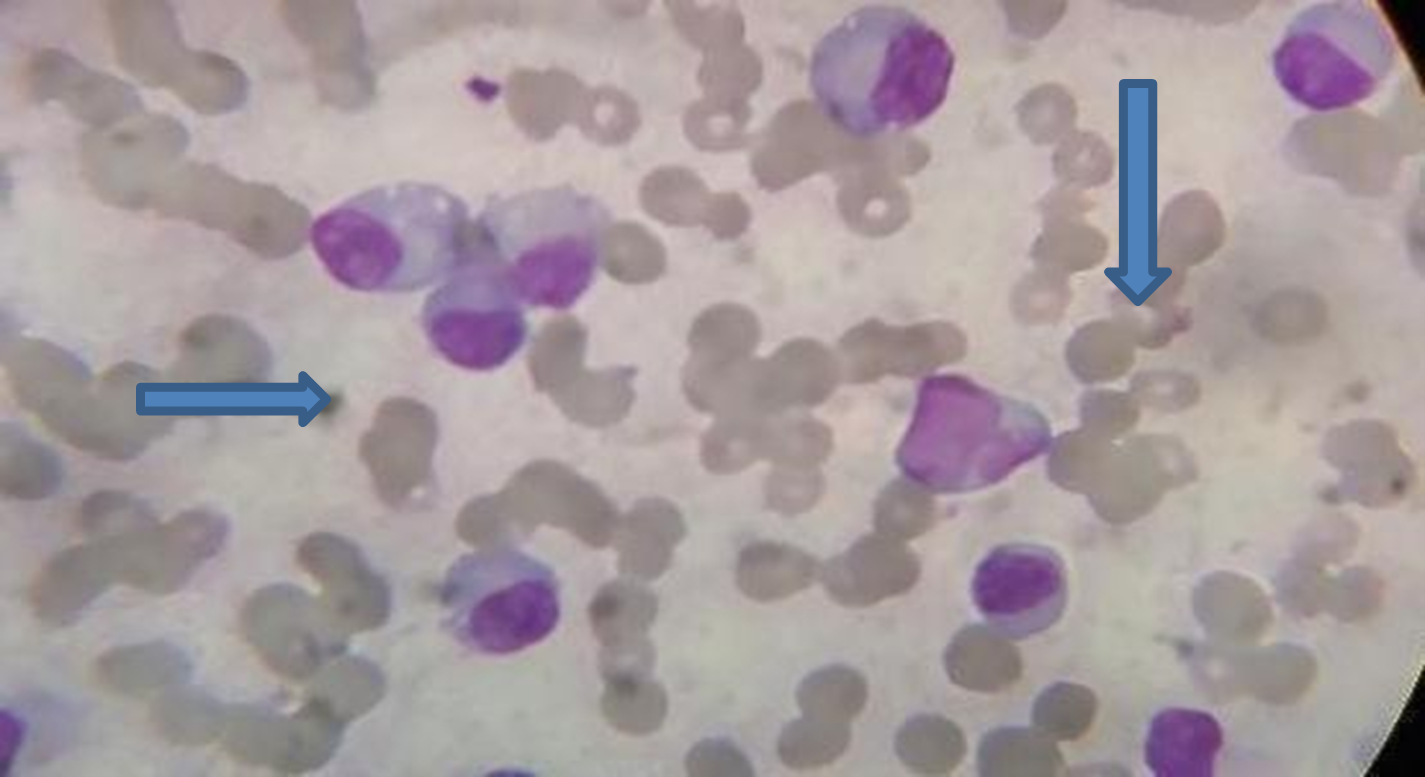 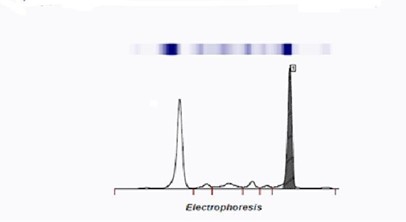 Bone marrow aspiration was performed with 72 per cent of cells being plasma cells and bone marrow biopsy showed hypercellular marrow with decreased erythropoietic and myelopoietic cells. The majority of the marrow spaces were replaced by plasma cells. 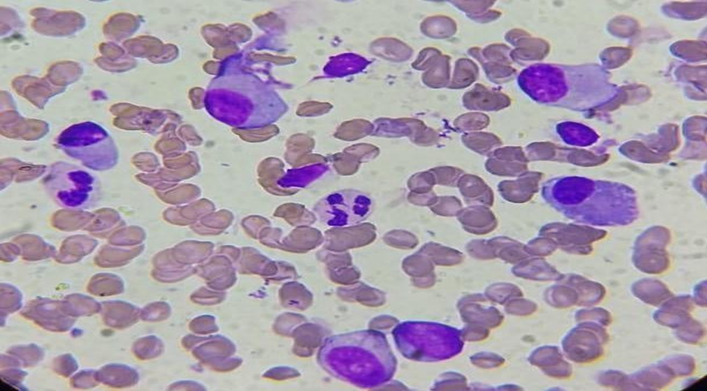 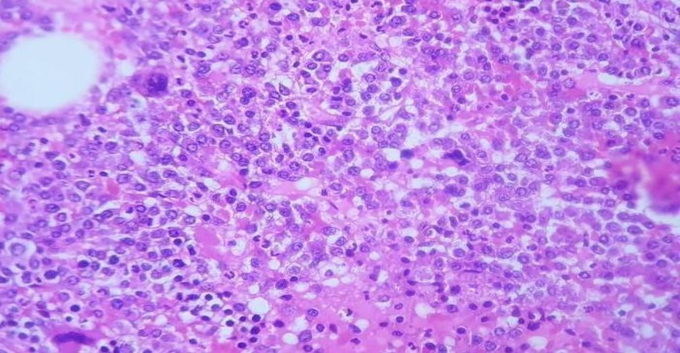 The peripheral blood immunophenotyping by flow cytometric analysis revealed a distinct population (79 % of total events) which was bright CD38 positive with negative CD45 and low SSC. The cells show cytoplasmic kappa light chain restriction and are positive for CD56, CD81, CD138 and CD38. Few atypical cells also showed aberrant expression of CD 117 and CD13. They were negative for CD19, CD20, CD27, CD200 markers as analysed. Of the remaining cells, 8 % are granular myeloid, and 10 % are lymphoid. These findings are suggestive of plasma cell leukaemia with 79 % cells with plasma cell immunophenotype with aberrant expression of CD117 and CD13. The FISH panel was negative for 1q21 gain, del 13q, t (11;14), t (4;14), t (14;1).

It is a very uncommon and aggressive form of monoclonal gammopathy which is characterized by poor prognosis and rapidly fatal outcomes. The outcome is thought to be poor because of the absence of effective treatment for this condition [7].

He was treated with weekly bortezomib, Adriamycin, dexamethasone along lenalidomide. Adriamycin was given for 1 cycle only. The skin lesions gradually flattened and then faded with treatment. After 7 cycles of VRD, the M spike decreased to 0.48. Then he was started on KPD for 3 cycles and attained complete remission. He underwent autologous stem cell transplant six months after the treatment and is in Complete remission since then. Since the prognosis is very poor, the use of combination chemotherapy followed by autologous/allogeneic stem cell transplantation is required to improve survival.

The extramedullary spread is explained by negative CD56, a cell adhesion molecule that anchors plasma cells to the bone marrow stroma in contrast to Multiple myeloma, where most of the plasma cell population are found in bone marrow [8]. Hypercalcemia, low platelet count, and destruction of erythrocytes are found in both diseases, but it is often seen in Plasma cell leukaemia as compared to multiple myeloma. Most plasma cell leukaemia patients have abnormal karyotypes. Plasma cell markers, which can be identified on immunophenotyping, include CD38 and CD138, as seen in our patient. Flow cytometry should be performed on peripheral blood to confirm the presence of plasma cells that typically have immunophenotypes of CD138+, CD38+, CD19–, and CD45+/–.

Patients having primary plasma cell leukaemia must undergo a detailed history and physical examination. A comprehensive laboratory evaluation of blood should be performed, including a complete blood count with differential, peripheral blood smear, urea and creatinine levels, bilirubin, lactate dehydrogenase, uric acid, β2 macroglobulin, albumin, serum protein electrophoresis, and serum- free light chain analysis. Chest X-ray along with whole-body imaging with either MRI or CT should be performed to look for metastasis. Finally, it is imperious to perform bone marrow aspiration and biopsy to assess morphology, proliferation rate, immunophenotyping, and cytogenetic analysis by FISH [9]

Conclusion
Plasma cell leukaemia is the most aggressive variant of monoclonal gammopathy and is a rare form of clonal plasma cell dyscrasia. Even rare at a younger age as seen in our case. Plasma cell leukaemia and Multiple myeloma are distinct clinic-pathologic entities with different treatment  options and most importantly, different prognoses. Therefore, early diagnosis and treatment is a must.

Informed Consent: The authors declare that it has been signed by the patient involved in the case including images.