Copyright: © 2022 Rizwana Shahid. This is an open-access article distributed under the terms of the Creative Commons Attribution License, which permits unrestricted use, distribution, and reproduction in any medium, provided the original author and source are credited

Abstract
Objectives: To investigate the frequency of gender-based pediatric and adult deaths and their causes in the Rawalpindi public sector tertiary care hospitals.

Results: Mean age of expiring patients from all 3 hospitals was 39.3 ± 5.1 years. About 949, 583, and 197 mortalities were reported from HFH, BBH, and DHQ hospitals, respectively, from 1st March – to 10th April 2022. Around 937 were adult deaths, while 792 were pediatric mortalities. Approximately 65 % of the adult mortalities were reported among males. Neonatal sepsis and low birth were the leading cause of pediatric mortality, while hospital deaths among adults were predominantly attributed to sepsis, stroke, and organ failure.

Conclusion: Males, specifically older than 70 years, were more vulnerable to hospital mortality due to sepsis, shock, and multi-organ failure. Sepsis and low birth weight among neonates necessitate due consideration for declining mortality.

Introduction
A systematic review of mortality trends prevailing in any geographical region is inevitable to ascertain the lacunae in healthcare delivery [1]. Of the various national health targets pertinent to Sustainable Development Goals (SDGs) to be achieved by 2030, various mortality indicators are of great significance in reflecting the health status of a nation [2]. Discussing these indicators to mitigate the fatalities is extremely important for attaining universal health coverage [3].

Analyzing the deaths primarily in third-world countries cannot be set aside. Scrutinizing the causes of mortality is imperative to take necessary steps for its diminution [4]. Clinical audit and quality assurance can prove very rewarding in enhancing healthcare services [5]. Evaluating the quality of care is needed for effective and efficient health planning and financing [6].

Grasping the mortality indicators of any region is essential for policy making and its congruent implementation that is primarily carried out through demographic surveys. Such surveys affirm the transparency of the gathered data and provide the points to ponder for the strategic planners [7]. World Health Organization (WHO) has bestowed us with an operational guide for pediatric mortality audit in healthcare facilities [8]; the reason being the reporting of raised neonatal death rates predominantly in underdeveloped countries across the globe [7].

Mortality audit enables to determine of the coherence of patient care with best practices by pinpointing the gaps in the provision of quality care to the end-users; the present study is therefore planned to explore the age and gender-based distribution of the mortalities along with the details of their reasoning in three tertiary care hospitals affiliated with Rawalpindi Medical University. Apart from providing an insight into the healthcare standards in our public sector teaching hospitals, this mortality review would also prove valuable to the stakeholders by mitigating avoidable deaths via timely management and accountability.

Results
The mean age of the patients succumbing to death in all 3 public sector teaching hospitals from 1st March – 10th April 2022 was determined to be 39.3 ± 5.1 years. Holy Family Hospital (HFH), equipped with more facilities to cater to and treat the most significant magnitude of the patients, reported the most oversized numeral of fatalities during the said period, as shown below in Figure 1. 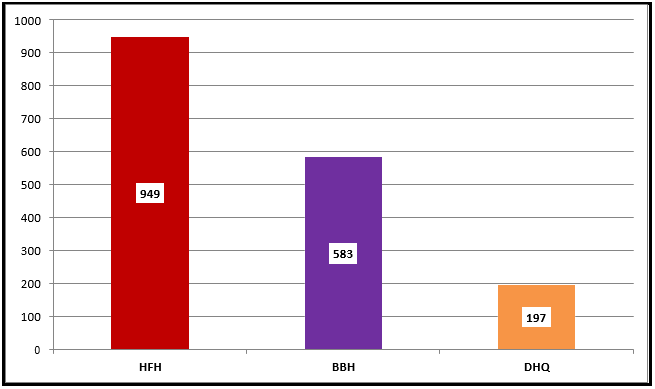 Age-wise mortality data discretely from tertiary care facilities is illustrated below in Figure 2a, 2b and 2c. 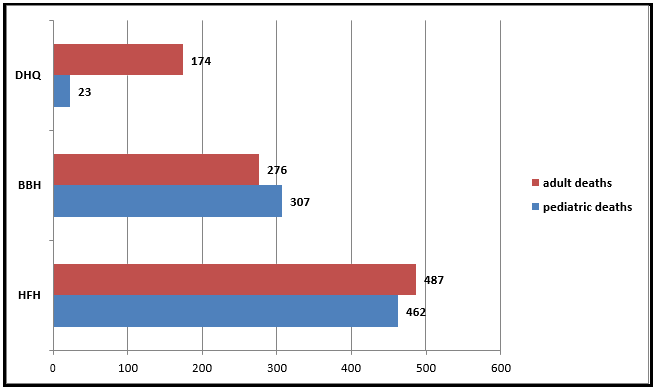 Figure 3: Comparison of adult and pediatric deaths in 3 teaching hospitals of Rawalpindi

Of the adult mortalities, males were expired in maximum propensity than those of females as depicted below in Figure 4.

Figure 4: Comparison of Mortalities Among Adult Males and Females From Tertiary Care Hospitals

Table 1: Causes of death among both groups of patients

Discussion
Inquiring about hospital deaths is one of the steps to diminish the hospital mortality rates [10]. Mortality and morbidity meetings in healthcare settings are routinely arranged to pinpoint the quality of healthcare concomitant to patients’ expiry [11]. Mortality rounds in hospitals are of substantial significance to address the patients’ well-being and ensure the acquisition of our healthcare professionals with essential clinical competencies [12].

Of the total 907 deaths reported among adult patients in our teaching hospitals, about 608 (67 %) expiries were among males. Females across the globe are determined to have comparatively longer life expectancy [7]. Likewise, reviewing the mortality data from 2009-to 2011 from a village in Brazil named Campinas, it became evident that females, despite the diagnosis of chronic diseases, had relatively fewer mortalities than those males. The reporting of disproportionate male deaths even from preventable ailments stressed the need for effective implementation of health contributive and preventive healthcare services, particularly in this gender paradox [13]. A similar study among Portuguese populates also revealed the gender-based variations in having the biological risk of illnesses and attitudes toward wellbeing [14]. Health behavior and attitude toward seeking healthcare services are some of the factors that might differ between males and females. People should be aware of their vulnerability to various gender-centered maladies for lifestyle modifications accordingly and prompt prevention.

The current study revealed the unnecessary deaths among the pediatric population admitted or born in 2 of our teaching hospitals (Figure 2a & 2b). Pediatric mortality is one of the salient indicators that depict the health status of a nation [15]. World Health Organization (WHO) has quantified a reduction in child mortality from approximately 12 million in 1990 to around 5 million in 2020 [16]; this significant decline is still a reflection of poor or underprovided pediatric healthcare services that need to be upgraded for universal health coverage. UNICEF categorized Pakistan as the riskiest place for birth in 2020 due to a neonatal mortality rate of 45.6 deaths / 1000 live births and an under-five mortality rate of 65.2 deaths / 1000 live births [17]. One sustainable development goal to achieve is attainable good health and well-being by 2030 [18]. Ensuring universal health coverage by reducing social and economic inequalities apart from terminating the outbreaks of communicable diseases can satisfactorily facilitate us in enhancing our community's healthcare.

Neonatal sepsis and low birth weight were identified as our children's primary causes of mortality. Similar to our results, an Indian mortality survey revealed low birth weight and neonatal infections as the leading causes of mortality among children; however, two-thirds of the deaths among female children in their community were attributed to pneumonia and diarrhea [19]. An Ethiopian study by Tadesse AW et al. in 2015-to 2019 concluded that poor antenatal care, cesarean section, birth asphyxia, and nosocomial infections contributed to the maximum propensity of neonatal mortality [20]. Adult patients in our study primarily succumbed to vital organ impairment, stroke, postpartum hemorrhage, and abdominal sepsis. Adults above 70 years of age died more in hospitals. Likewise, a study among Nigerian hospitalized patients verified sepsis, hepatic disorders, and stroke as the leading causes of expiry [21].

On the other hand, pneumonia and influenza were documented as the foremost cause of death among American adults, specifically those admitted with critical illness [22]. However, prolonged waiting time in shifting the patients from the emergency department to ICU was acknowledged as the chief reason for hospital mortality among adult patients in Netherlands [23]. Timely and comprehensive auditing of hospital mortality data is of paramount significance to investigating the underlying paucities that are contributing to poor healthcare indicators of a nation [24].

Prompt implementation of quality management in our hospitals for assessing the healthcare outcomes and strategic planning by drafting a set of quality indicators is urgently necessitated to eliminate grave consequences [25]. Auditing the in-hospital mortality data periodically will assist in identifying the quality gaps in healthcare services delivery and hence direct the administrators in restructuring the healthcare to avoid prospective misfortunes.

Conclusion & Recommendations
Neonatal sepsis and low birth were the leading cause of pediatric mortality, while hospital deaths among adults were predominantly attributed to sepsis, stroke, and organ failure. Adults above 70 years of age were more prone to mortality. Rigorous measures by administrators of hospitals for infection prevention and control and arranging training sessions for staff capacity building can play a pivotal role in reducing mortality. Department-wise mortality data can assist in identifying the disciplines demanding critical care to evade profound implications. So, establishing a unit-wise mortality committee for discussing the causes of mortality before bringing them to the attention of the central hospital committee for fact-finding is imperative. Moreover, implementing antibiotic policy in hospitals to maximize clinical cures or prevent infection while limiting the unintended consequences of antibiotics is also essential to achieve the desired outcomes.

Conflict of interest: None