Copyright: © © 2021 Shalini Malhotra. This is an open-access article distributed under the terms of the Creative Commons Attribution License, which permits unrestricted use, distribution, and reproduction in any medium, provided the original author and source are cred

Introduction
Minimally invasive surgery has become the surgery preferred by most patients due to the many benefits, particularly early return to normalcy with less scarring. However, technical limitations make it challenging for gynecologists to consider the same in many situations, most importantly the large size of the lesion reaching the upper abdomen. Here, there is room for innovative techniques to perform surgery in the most minimally invasive way, delivering the best care to the patient with the least scars on the belly. This is a rare case of the incidentally discovered huge pelvic abdominal lesion, that could be successfully managed using minimally invasive surgery allowing enhanced recovery and return home for the patient.

Case Report
Ms H was a 44-year-old fit and well unmarried lady with no previous illness or surgeries in the past and neither any gynecological complaints till August 2020 when she had amenorrhea for 2 months. This was followed by her menstrual period starting on 3rd October and continuing for 3 weeks when she sought an opinion from a gynecologist, who advised her pelvic ultrasound.

Mrs. H did not have any history of loss of appetite, weight loss or gain, increase in abdomen size, tightening of clothes on the abdomen. Ultrasound pelvis revealed a large abdominopelvic lesion size approx. 26 cm with cystic and solid components, minimal septations. She was then referred for surgical removal and histopathological correlation.

In AQWCH, upon examination of the abdomen, there was a huge mass occupying the entire lower and upper abdomen, up to 36 weeks pregnant uterus size, cystic inconsistency but immobile. She underwent blood tests (CA125, CA19-9, CEA, and AFP -all normal ) and MRI Pelvis which revealed huge right ovarian mature cystic teratoma, of size 28.2X22.5X15cm.

It displays a low signal in T1 and high signal in T2 WI. The wall of the cyst showed normal enhancement in post-contrast exam.

She then was counseled about the need for surgical removal of these lesions being mandatory and should be as minimally invasive as possible, which is the aim of this GYN department. She accepted the risk of laparotomy in the event of technical challenges in minimally invasive surgery. It was planned to decompress the lesion through a 2-3  cm supraumbilical incision. The same would then be used for inserting a  12mm camera the port there, with the entry of 3 more 8mm ports in the lower abdomen, followed by robotic oophorectomy if the mass could be removed with help of Da Vinci Robot. Else, the abdomen would be opened and oophorectomy was done.

On 17th November 2020, the patient was operated on as planned. After a 3 cm supraumbilical incision in the midline, peritoneal fluid was aspirated and sent for cytology. The cyst wall was seen and stay sutures were secured in the cyst wall. it was then opened by a stab wound in between the sutures, and suction cannula inserted with the removal of 3.5 litres of clear straw coloured fluid from it. The stay sutures were left inside the abdomen and 12mm camera port inserted with other ports as planned, robot docked, oophorectomy was done with challenges in mobilization to see pedicle. 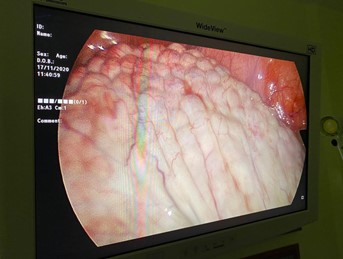 Figure 1: Cyst after decompression of fluid as seen through the Da Vinci Robot

Thereafter, hemostasis confirmed. Uterus left tube and ovary seen as normal. The opening of the cyst wall with sutures was placed under the camera port and the robot undocked. through the 12mm port, suture ends were pulled out and port removed and sutures held outside abdomen and walls of cyst everted leaving cyst cavity open.1150 gms of fate were scooped out using small retractors to reduce time spent in the surgery. 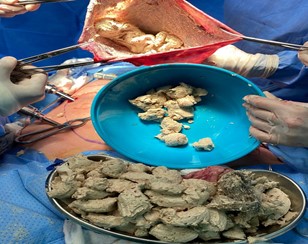 Figure 2: cyst walls being held and fatty contents being scooped out with some remaining inside.

The laparoscopic vision of the abdominal part of the cyst was ensured through an 8mm port in the lower abdomen. After significant decompression, cyst wall could be removed through the 3 cm incision. Ports closed under vision. 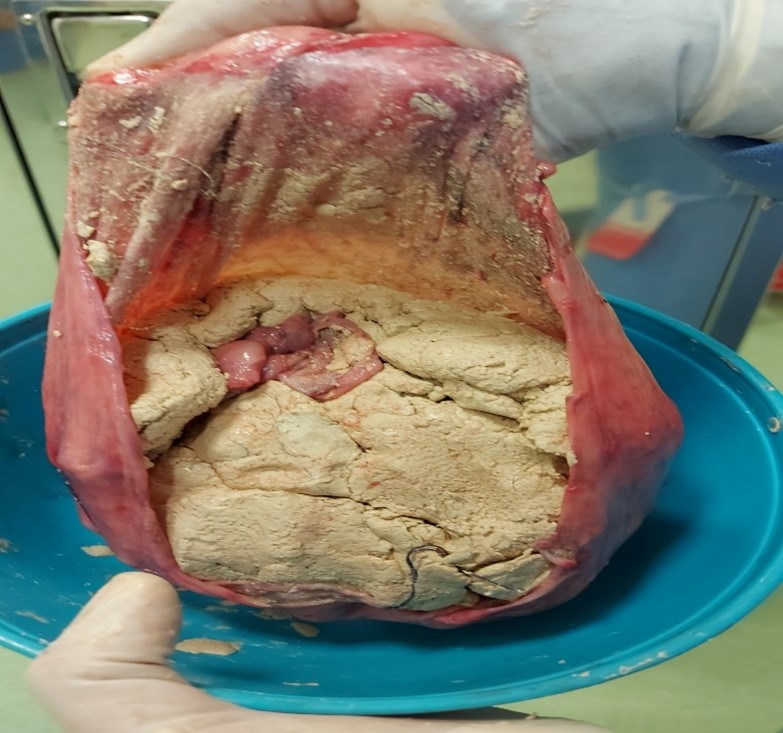 The cyst was sent for histopathology and was reported as a benign teratoma ( epidermoid cyst). patient started sips of fluid in 2  hours from the end of surgery and soft diet within hours. She was encouraged to ambulate and the catheter was removed in 8  hours of surgery starting a full diet by night. She was comfortable with minimal analgesics. She was discharged well within 24 hours of surgery of a 29 cm lesion from the abdomen.

Discussion
The giant ovarian cyst is rarely found nowadays because of the improved imaging modalities and minimally invasive approaches so the diagnosis is made at an earlier stage. However, germ cell tumors, since they are asymptomatic, can be found in large sizes Serous cystadenomas are the most common types of epithelial neoplasms encountered with benign cystadenoma about 75 % [1]. Ovarian germ cell tumors (OGCTs) comprise approximately 20 to 25 percent of ovarian neoplasms overall, but account for only approximately 5 percent of all malignant ovarian neoplasms [2].

In current times, laparoscopic excision is preferred even in the management of giant ovarian cysts mainly due to its least invasiveness, better cosmesis, and shorter hospital stay, [3]. All reported techniques include decompression of the cyst, facilitate manipulation of the cyst and ovary,  prevention of perforation and spillage. There are no guidelines in the literature regarding the maximal size of cyst which can be considered for laparoscopic surgery. The biggest fear any gynecologist managing these cases has been technical difficulties due to the large size and possible malignancy [4] With the proper patient selection, minimally invasive surgery can be used safely for a select group of patients with large, benign ovarian cyst [5].

There are publications in the literature of many cases of large adnexal masses being removed by minimally invasive surgery, which in the modern era is wanted by the patients. Sang Wook reported performing ovarian cystectomy of huge ovarian cysts via a laparoscopic extracorporeal approach through an umbilical single-site incision, successfully minimizing the possibility of cyst contents leaking into the peritoneal cavity. Using  a single-site incision at the umbilicus for huge adnexal cystic masses, according to their publication appears safe and spares the additional costs of long-stay, and being osmotically effective is highly appreciated by patients. The same author also suggested in another publication another technique using wound retractor. The cystic mass surface was exposed by inserting the wound retractor through the umbilical port, and cystic fluid was aspirated using a suction-irrigation system after puncture with a trocar. Then, laparoscopic adnexal surgery was performed in the usual manner. The mean maximal diameter of cysts, mean operation time, and mean postoperative hospital stay were 17.8 ± 5.4 cm, 81.3 ± 28.2 minutes, and 4.4 ± 2.0 days, respectively.

Laparotomy remains the gold standard due to several technical difficulties in laparoscopy, including a limited surgical field, risk of unintended cyst rupture during the insertion of the Veress needle or trocar, and the possibility of malignancy. However, patients even with large masses prefer few incisions and scars.

Conclusion
Management of large pelviabdominal masses can be a challenging yet satisfying experience when innovation in surgical techniques can be implemented for the best care of the patient. We do hope there is more research into equipment that can help gynecologists in such complicated procedures in the future.