Copyright: © 2022 Vineet V Mishra. This is an open-access article distributed under the terms of the Creative Commons Attribution License, which permits unrestricted use, distribution, and reproduction in any medium, provided the original author and source are credite

Management of Isthmocele: A Case Report

Abstract
Uterine scar dehiscence after Caesarean section is known as ‘Caesarean scar defect’ or ‘niche’ or ‘pouch’ or ‘Isthmocele.’ Transvaginal Ultrasound (TVS), Saline infusion sonohysterogram (SIS), Hysterosalpingogram, Hysteroscopy, and MRI are various modalities with which we can make the diagnosis. Medical or surgical management is undertaken depending on the size and type of defect. Surgical management includes hysteroscopy, laparoscopy, laparotomy, and vaginal repair procedures. The aim is to manage symptomatic patients.

Introduction
For the first time, Hugh Morris described “Isthmocele” in 1995 as a defect on the anterior wall of the uterine isthmus located at the site of previous CS. It was also referred to as “cesarean scar defect” or “niche.” Shallow uterine incisions, patients with a CS performed during active labor with cervical effacement are thought to be some of the predictive factors in increased development [1]. Also, in case of a cervical dilatation > 5 cm or a labor duration of > 5 hours, the chances of isthmocele formation are more [1]. Retroflexed uterus, multiple cesarean sections, lower position of cesarean section, incomplete closure of the hysterotomy, early adhesions of the uterine wall, and a genetic predisposition may also contribute to developing a niche. Scar tissue dehiscence, scar pregnancy, and abnormally adherent placenta are some of the obstetric complications associated with this defect.[4] Patients sometimes are symptomatic or present with post-menstrual bleeding/spotting, pelvic pain, and secondary infertility. Transvaginal Ultrasound (TVS), Saline infusion sonohysterogram (SIS), Hysterosalpingogram, Hysteroscopy, and MRI are various diagnostic modalities [2]. The goal for isthmocele management is to deal with symptoms if present. Symptomatic patients are treated medically with oral contraceptives or surgically by Hysteroscopy, Vaginal repair, Laparotomy, and Laparoscopy [3].

Case Report
A 29yr old female (P2A0L2) came to our hospital complaining of continuous bleeding per vaginum for 1 month. 2-3 pads were soaked daily on average. The patient had no complaints of abdomen pain. She had a history of 2 cesarean sections nine years ago and 3 years ago for breech presentation and previous CS, respectively. She also had an account of Dilatation & Evacuation done for retained products of conception 1 month after the 2nd cesarean section. There is no other history of medical illness or surgery. She had irregular menses every 20-30 days, with a moderate flow for 5-7 days. 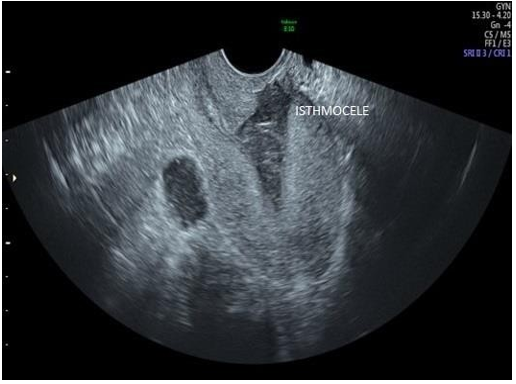 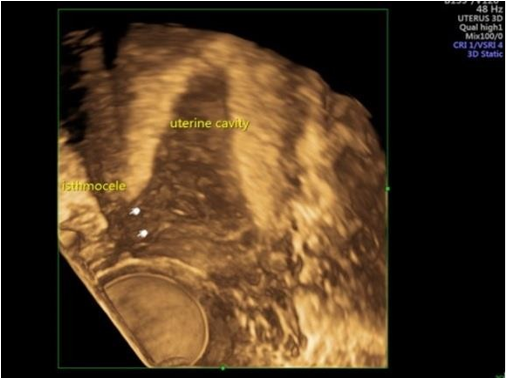 MRI confirmed the diagnosis, showing a wide defect in the anterior wall of the lower uterine segment suggestive of scar dehiscence. The patient was initially treated medically with oc pills for 2 months and a tablet of tranexamic acid 500 mg (SOS). She returned with the symptoms not relieved. The patient was managed by laparotomy. The scar defect was identified and was excised up to the endometrial layer of the anterior uterine wall. The incision was closed using a double- layered interrupted suture with vicryl 1-0. The patient came for follow-up after 1 month and after her menses. She had no complaints, and her post-operative transvaginal ultrasonography showed healed uterine scar (figure 3). 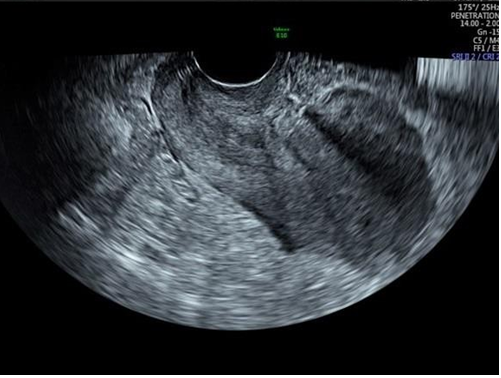 Discussion
There has been a drastic increase in cesarean section rates in the recent decade. It has surged to around 27 % [3]. Our patient had a history of two cesarean sections 9 years and 3 years back for breech and previous CS, respectively. She had a complaint of bleeding per vaginum for 1 month. Transvaginal ultrasound was used to diagnose isthmocele, and as she did not improve with medical management, laparotomy was done for management after transfusing two units of packed cell volume.

The most frequently observed symptoms of isthmocele are intermenstrual spotting, dysmenorrhea, dyspareunia, and chronic pelvic pain. [4] There is an increase in obstetrical sequelae, such as placenta accrete, scar dehiscence, and an ectopic scar pregnancy developed due to poor healing of the CS incision.

A shallow incision through the cervical tissue, inadequate suturing, or incomplete closure of the uterine wall due to a single-layer endometrial-saving closure technique or use of locking sutures; and surgical interventions that promote adhesion formation (e.g., non- closure of the peritoneum, inadequate hemostasis, visible sutures, etc.) are various suggested causes for the development of isthmocele. Primarily, isthmocele located in the higher part of the cervix correlated with previous cesarean section, whereas, in the patients with the defect in the lower part of the cervical canal, the cesarean section had been performed after cervical dilatation [5]. Discontinuation of the myometrium at the site of a previous CS is seen as a hypoechoic area described as a “niche” [6]. A “filling defect,” anechoic and triangular shape, is observed on SIS under the bladder recess, in the region between the uterine body and the cervix. This is the typical site where low-transverse cesarean deliveries are performed [7]. Saline contrast sonohysterography (SCSH, also called hydrosonography or hysterosonography) has been aiding in assessing intrauterine focal lesions7. Studies have evaluated the effectiveness of combined hormonal therapy (HT) in patients with recurring vaginal bleeding after cesarean section in which estrogen and progesterone tablets containing 0.5 mg of norgestrel and 0.05 mg of ethynyl estradiol were used [7]. In a few studies, it was observed that surgical treatment of isthmocele using a minimally invasive approach (operative hysteroscopy) is found to restore fertility [8]. A laparoscopic repair can be considered appropriate in symptomatic women with a residual myometrial thickness of less than 3 mm who wish to conceive. [8]

Conclusion
Our case demonstrates that the basic approach in dealing with Isthmocele is to treat the symptoms. Asymptomatic patients do not need treatment at all, and treatment should be aimed after keeping in mind the history and desire for future pregnancy.

Acknowledgements: We are thankful to our librarian Ms. Jyotsana Suthar for her help in literature search for preparation of manuscript.