Copyright: © 2022 Chukwuemeka Igwe. This is an open-access article distributed under the terms of the Creative Commons Attribution License, which permits unrestricted use, distribution, and reproduction in any medium, provided the original author and source are credit

Abstract
Inverted Meckel's diverticulum is a condition in which the diverticulum inverts itself into the bowel. It needs to be understood how such an inversion occurs due to the condition's rarity. However, some factors contributing to the inversion include abnormal peristalsis around the diverticulum and non-fixity of the diverticulum itself. The inverted diverticulum can cause luminal compromise and act as a lead point for intussusception, leading to obstruction. It is rarely encountered in medical practice.

Introduction
Inverted Meckel's diverticulum is an intraluminal, blind-ending structure usually at the mid to distal ileum, which occurs due to persistence of the congenital omphalomesenteric duct and incidentally found, or through a clinical evaluation for intestinal obstruction, intussusception, gastrointestinal bleeding, and abdominal pain [1]. Bleeding is the most typical clinical presentation, particularly in younger patients [2]. Inverted Meckel's diverticulum is a rare pathological finding and a rare cause of small bowel obstruction [3]. Computed tomography (CT) remains the diagnostic tool for identifying intestinal obstruction and intussusception cases. The most useful diagnostic tool in patients with bleeding and ectopic gastric mucosa is the technetium-99m pertechnetate scan (Meckel's scan) [4]. 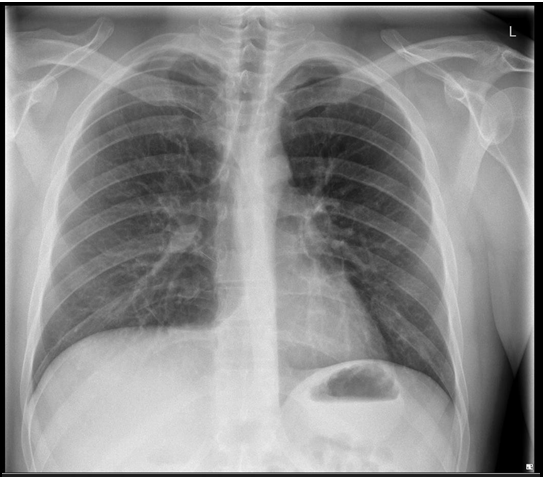 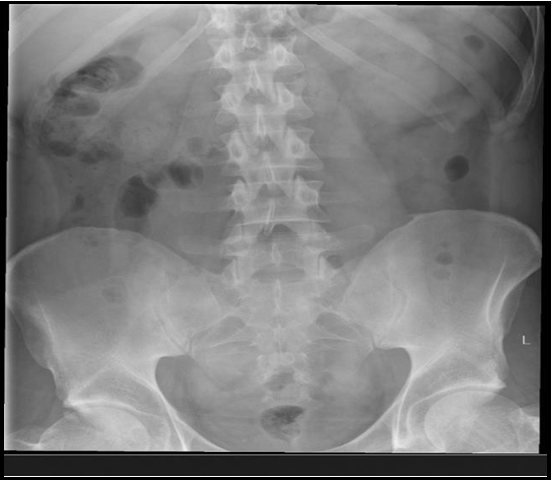 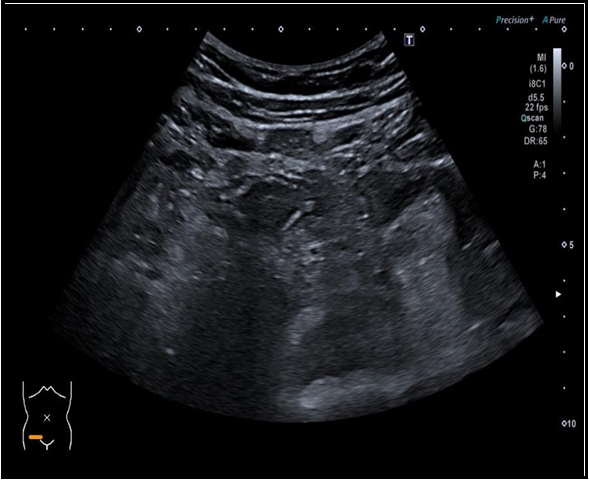 Figure 3: Abdominal ultrasound
The patient had a contrast CT abdomen and pelvis, which showed Ileocolic intussusception with no obstruction, free gas, or free fluid. 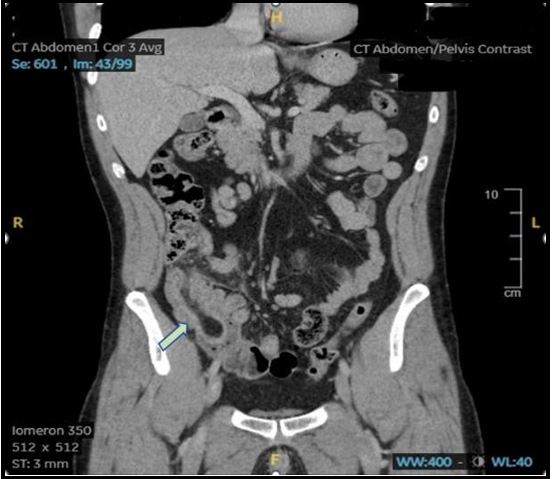 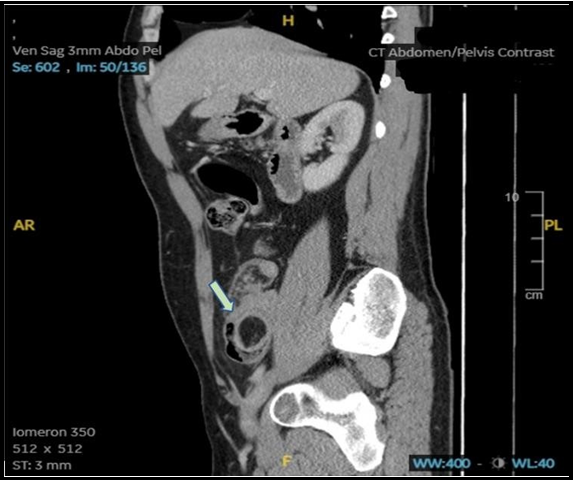 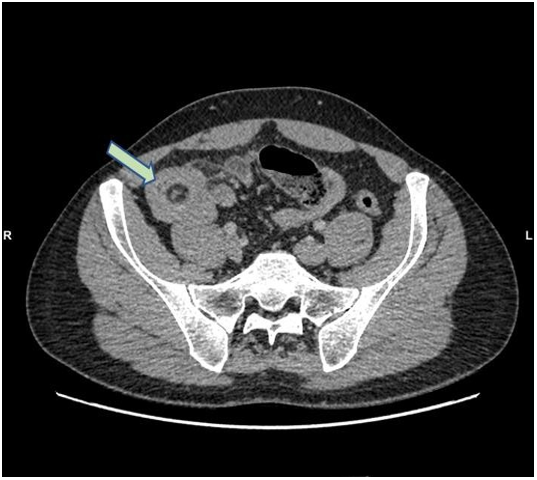 The patient did an MRI small bowel study to assess for a possible neoplastic cause, that showed a sizeable pedunculated lesion of fatty signal in the distal small bowel, some distance from the ileocaecal valve, measuring 6 cm in length, which is suggestive of a pedunculated small bowel lipoma. The small bowel was otherwise normal, and no evidence of small bowel obstruction. 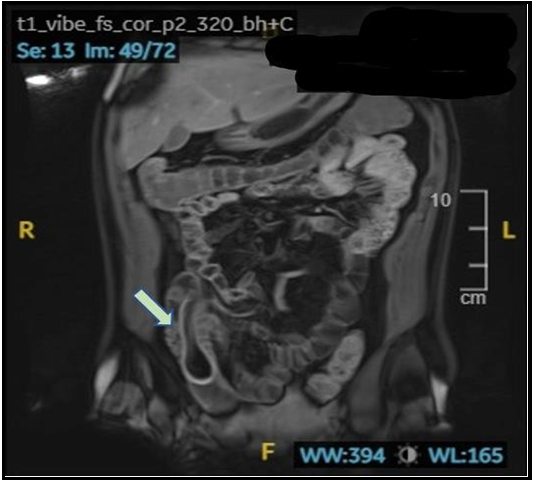 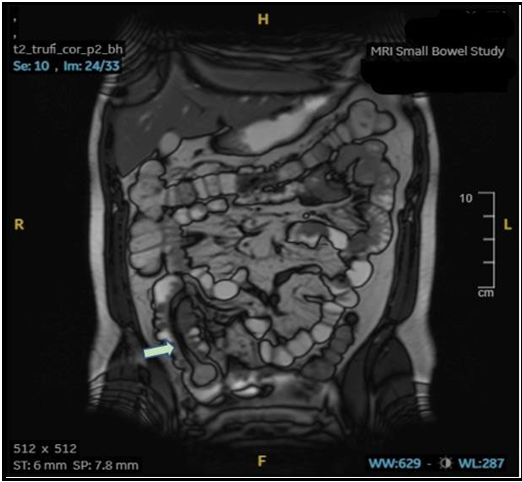 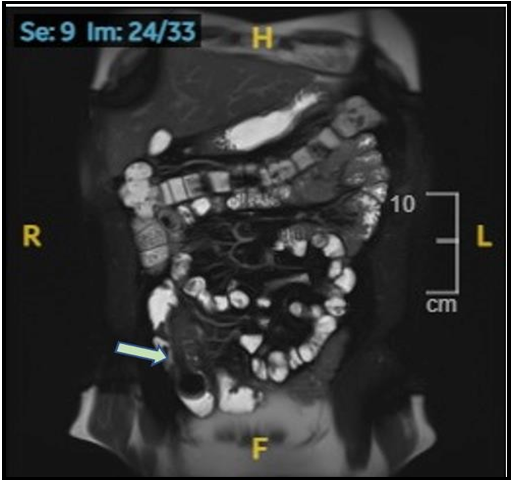 The patient subsequently had a mini-laparotomy with small bowel resection and site-to-site anastomosis, and he did very well post-operation.

The serosa was smooth, and the mucosa around the diverticula was soft and hemorrhagic. On slicing, the diverticulum contained fat.

Sections from the everted diverticulum showed small intestinal mucosa with gastric heterotopia. There was no neoplastic or granulomatous lesion seen. Teams from the rest of the segment of the small intestine were unremarkable. The features were those of the inverted Meckel diverticulum.

Discussion
Meckel's diverticulum is an outpouching at the terminal end of the small intestine, which occurs in 1 % - 3 % of the population, making it the most common congenital disability of the gastrointestinal tract5.

It causes symptoms in a tiny population. Most people remain asymptomatic without ever knowing they have    Meckel's diverticulum. The disease has an equal male-to-female ratio; however, males are 2-3 times more likely to have complications [6]. Symptoms usually occur in the first year of life but can occur in adults. These will include gastrointestinal bleeding, abdominal pain, cramping, and signs of bowel obstruction (abdominal pain, bloating, diarrhea, constipation, and vomiting). Under 5-year, children have gastrointestinal bleeding as the most typical symptom due to developed ulcers in the small intestine when the diverticulum contains gastric tissues/glands and secretes stomach acid. Bowel obstruction occurs more frequently in older children and adults [6].

Diagnosis of inverted Meckel's diverticulum with various imaging modalities is possible. The age at presentation, including different clinical manifestations, is vital for radiologic imaging in making a diagnosis.

Ultrasound is commonplace in pediatric patients and can be helpful in the characterization of inverted Meckel's diverticulum, although of limited value in adults. A hypoechoic blind-ending tubular structure which may be fluid-filled, is seen in the right lower quadrant with the typical gut signature (hyperechoic mucosa), and a connection to the usual small bowel is demonstrable. The echo-free contents are incompressible and inexpressible into the connecting bowel loop8. Enteroliths appear as shadow-producing echogenic foci [9].

Other imaging techniques have mainly replaced barium studies because most cases present acute symptoms. It can demonstrate inverted Meckel's diverticulum as a soft polypoid filling defect located in the distal portion of the ileum10. Masses or ectopic mucosa may cause a filling defect within the diverticulum [11].

Computed tomography (CT) remains the principal modality for identifying intestinal obstruction and intussusception cases. CT can visualize complications such as intussusception, bowel obstruction, and enteroliths. In communication with the small bowel, a blind-ending structure is filled with gas or fluid, mainly when a leading point with intussusception is formed [5,12].

CT enterography has enhanced visualization of the small bowel, hence, higher sensitivity in making a diagnosis [13].

CT angiography may show the persistent omphalomesenteric artery in some individuals with Meckel's diverticulum who present with continued bleeding5. There may be extravasation of contrast material from actively bleeding cases.

Surgical treatment involves segmental resection and anastomosis, which can be done either through open abdominal surgery or laparoscopically.

Conclusion
Inverted Meckel's diverticulum is a rare disease that causes various abdominal symptoms. It occurs because of abnormal peristalsis of the diverticulum due to its non-fixity to the abdomen. Radiologists' and surgeons' attention to this rare clinical entity is essential. Diagnostic assessment is complex due to overlapping clinical and imaging features. However, CT remains the diagnostic tool for identifying intestinal obstruction and intussusception cases. Treatment is by surgery, either through open abdominal surgery or laparoscopically, and includes segmental resection and anastomosis.