Copyright: © 2022 Wayne B. Bauerle, MD. This is an open-access article distributed under the terms of the Creative Commons Attribution License, which permits unrestricted use, distribution, and reproduction in any medium, provided the original author and source are cr

Herpes zoster (HZ) infection is seen in 2.9-19.5 per 1000 people worldwide. The perioperative risk of myocardial infarction (MI) following HZ reactivation is unknown.
Case Presentation:
We present the case of a middle-aged female without prior history of coronary artery disease (CAD) who underwent a paraesophageal hernia repair following two episodes of shingles. The preoperative assessment indicated a “below average” risk (0.1-0.4%) of major adverse cardiac events (MACE). However, the patient experienced an intraoperative MI.
Conclusions:
The case raises awareness that HZ reactivation may be a potential risk factor for perioperative MI. Further research is needed to establish the associated risk along with determining the appropriate perioperative management for patients with HZ reactivation.
Keywords: Perioperative risk, Major Adverse Cardiac Event, Herpes Zoster, Case Report

We present a patient with shingles three weeks before her procedure who was deemed “below average” risk for perioperative MACE yet suffered acute ST-segment elevation myocardial infarction (STEMI) while undergoing robotic paraesophageal hernia repair. The report is presented using EQUATOR guidelines with written HIPAA authorization obtained from the patient.

Case Presentation:
A 56-year-old female with a history of hiatal hernia and obesity presented as a referral to our clinic with recurrent hiatal hernia after hiatal hernia repair and Nissen fundoplication. Symptoms included nausea, vomiting, bloating, heartburn, and epigastric pain.

The physical exam was unremarkable, vitals were within normal limits, and body mass index (BMI) was 41.21 kg/m2.

Esophagogastroduodenoscopy (EGD) showed a 6 cm paraesophageal hiatal hernia with possible Nissen disruption on the retroflex view (Figure 1). Antral biopsy was negative for H. pylori, with the mucosa appearing as mild chronic inactive gastritis. The high-resolution manometry study was regular. Computed tomography (CT) imaging confirmed the presence of a paraesophageal hernia with the entire fundus of the stomach in the thoracic cavity. 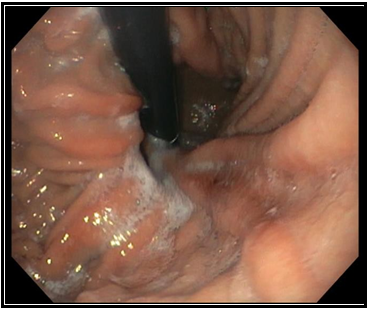 Figure 1: Image of esophagogastroduodenoscopy retroflex view for the patient presented.
As shown above, the image is suggesting hernia recurrence and Nissen disruption.

Given the findings, we recommended a Nissen takedown, repair of the hiatal hernia, and subtotal gastrectomy with Roux-en-Y reconstruction. The patient was enrolled in our program, evaluated by dietician, social worker and referred to cardiology for risk stratification. The cardiologist noted she was a life-long non-smoker, had no family history of CAD, and denied symptoms of angina or dyspnea on exertion. Vital signs and physical exam were unremarkable. An echocardiogram showed an estimated ejection fraction of 55% without regional wall motion abnormalities. The valvular function was normal. Based on these findings, the cardiologist deemed the patient as low risk. This assessment was affirmed by the patient’s NSQIP perioperative risk score, which was estimated at 0.1% (Figure 2). The patient’s preoperative electrocardiogram (ECG) is shown in Figure 3. 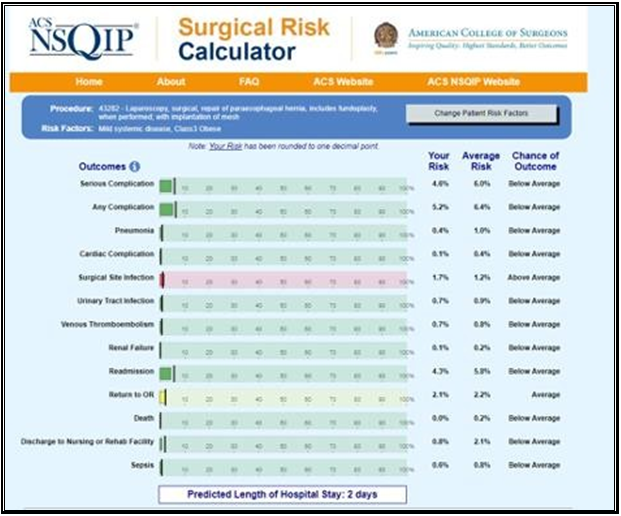 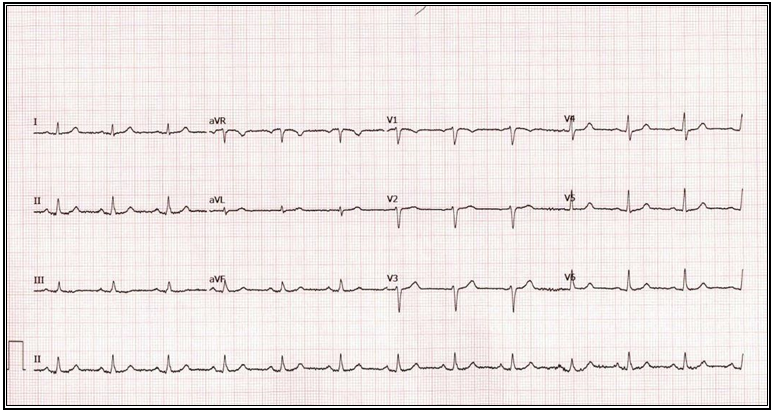 Before meeting the team for preoperative follow-up, the patient presented to the emergency department twice. The initial visit was two weeks before her procedure. She presented with a left-sided neck rash which was deemed to be shingles. She was started on valacyclovir and Silvadene cream. A week later, she represented with left-sided facial and neck pain. She was started on another course of antiviral medication. She completed the course of antiviral therapy, and her symptoms improved. Consideration was given to delaying surgery; however, given the patient’s improving symptoms and completion of her antiviral regimen, the decision was made to proceed with surgery.

On the day of surgery, the history and physical were reviewed with no changes noted. The patient’s shingles had almost resolved. She was taken to the operating room, and anaesthesia was induced with standard American Society of Anaesthesiology (ASA) monitors and average induction doses of medications. The anaesthesiologist noted a brief period of hypotension after induction, which was treated with phenylephrine. The patient’s intraoperative vital trends are shown in Figure 4. Intraoperative notes from approximately 30 minutes after induction noted transient ST-segment elevations in lead III. The blood pressure was stabilized, and ST segments improved. This episode was thought to be due to the reverse Trendelenburg position. Robotic-assisted Nissen takedown, subtotal gastrectomy with Roux-en-Y reconstruction, and repair of the paraesophageal hernia were completed with only 20 ml of blood loss. The total operative time was 3 hours and 29 minutes.

The patient was transported to the post-anesthesia care unit (PACU). However, postoperative ECG demonstrated ST-elevations in the inferolateral leads concerning STEMI (Figure 5). Cardiac enzyme elevations supported the diagnosis of MI, and a follow-up echocardiogram revealed inferior wall hypokinesis. Cardiac catheterization was deferred as perioperative heparinization would raise the risk of bleeding-related surgical complications. Instead, the patient was medically optimized with beta-blockers, a statin, and an angiotensin-converting enzyme (ACE) inhibitor. Antiplatelet therapy was added the night of surgery. The patient was discharged on postoperative day 4. Outpatient nuclear stress testing confirmed the presence of a sizeable inferolateral perfusion defect, and cardiac catheterization demonstrated a 100% proximal left circumflex stenosis, consistent with recent inferolateral STEMI. Diffuse 30% stenosis of the right coronary artery and 40-60% stenosis of the mid-left anterior descending artery was additionally noted, but these lesions were considered not to be “high grade” by the interventional cardiologist. 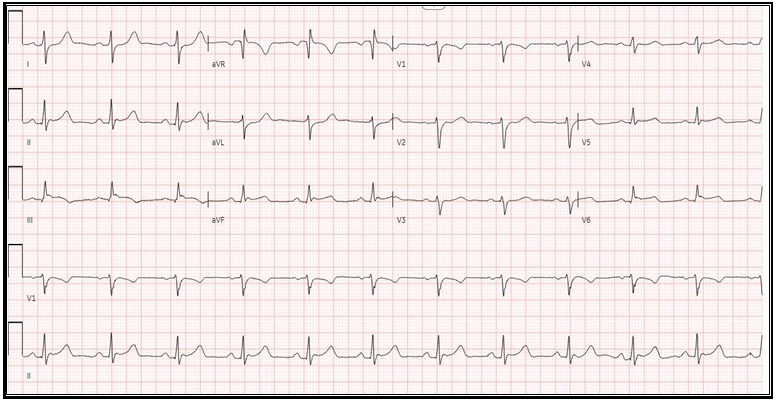 Discussion
Preoperative cardiac risk stratification for this patient allows for evidence-based quantification of the perioperative risk of (MACE) according to the 2014 American College of Cardiology (ACC) and American Heart Association (AHA) Risk Stratification Guidelines. Standard risk-stratification calculators utilized to estimate perioperative risk have the benefit of being derived from large data sets and are either prospectively or externally validated to increase generalizability. Their accuracy comes from the c-statistic for each of these calculators which is reported to be between 0.7 and 0.8 [5,6]. The RCRI is a six-point index in which a score greater than or equal to 2 indicates a greater than 1 % risk of MACE [7]. This patient’s score of 1 (high-risk surgery) suggests the patient is at low risk for perioperative MACE. The NSQIP and Gupta Risk calculators are additional calculators derived from the NSQIP database, which incorporate both patient and surgical factors to calculate risk [8,9]. The patient’s perioperative risk of MACE was estimated to be between one (NSQIP) and four (Gupta) events per thousand cases, supportive of the assessment of the low likelihood of perioperative MACE (Figure 2, Figure 6). The fact that this patient suffered intraoperative STEMI may be explained by the fact that risk calculators may have underestimated her preoperative risk or that her risk may have been accurately estimated, but that she suffered the unfortunate 1-4 events per thousand cases suggested by preoperative risk assessment. However, an alternative and provocative hypothesis is that the patient’s recent HZ reactivation may have represented an additional unappreciated risk for perioperative MI. Viral migration from the neuron into the vasculature has previously been demonstrated, and the subsequent inflammatory response leading to vessel occlusion and ischemia provides a precise pathophysiologic mechanism for HZ-induced vascular events [10]. We speculate that the patient’s recent HZ reactivation combined with the expected intraoperative surgical stress response represented a “two-hit” mechanism to increase this patient’s risk of perioperative MI. 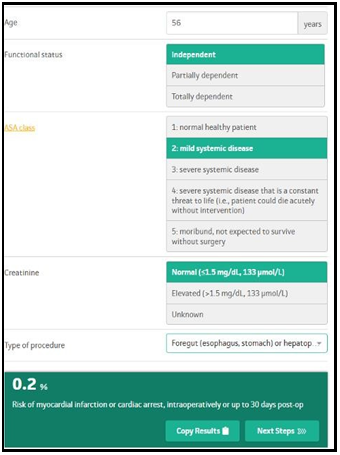 Figure 6: Image of Gupta risk results for the patient presented.

The patient’s risk of myocardial infarction or cardiac arrest when entering the patient’s clinical information was deemed to be 0.2 %.

Several recent systematic reviews have linked HZ reactivation to an increased risk of vascular events such as stroke or MI. Erskine et al. included 12 articles, with 9/12 being retrospective cohort studies and 3/12 being self-controlled case series [11]. Results showed that patients with HZ reactivation were 20-40% more likely to experience a cerebrovascular event and cardiovascular event at 3 months of HZ onset, and 10-30% were more likely to experience a cerebrovascular and cardiovascular event within 1 year of HZ onset [11]. Zhang et al. reviewed 11 studies, most of which were cohort studies (8/11), with the remaining being case controls, and again found that the risk of stroke (RR 1.9, CI 1.47-2.51) and MI (RR 1.18, 1.07-1.30) was increased after HZ reactivation (2). Several limitations must be considered: (1) reviews were based on lower-quality retrospective evidence; (2) variance in disease coding among the studies could lead to higher rates of false positives, and (3) the probability of unaccounted for MI’s is likely higher than anticipated [2,11].

Alternative explanations of the patient’s perioperative MI must be considered. For example, the simplest explanation may be that the patient had undiagnosed coronary artery disease and suffered a perioperative MI. This is supported to an extent by the postoperative findings of CAD on cardiac catheterization. However, the severity of CAD was judged only to be “mild-to-moderate” by the cardiologist (the left circumflex total occlusion representing recent thrombosis), and evidence-based risk stratification suggested that the risk of MACE was around 1-5 events/thousand cases. SLE itself has been associated with an increased risk of cardiovascular events, including perioperative MI; however, in the case of the latter, a single retrospective report suggested that risk was only slightly elevated (2.4% vs. 2.0%) and that this association was driven mainly by significant differences in event rates in a younger patient cohort [12,13]. Despite these associations, this patient’s SLE was well controlled on medical therapy, with a normal recent ESR and essentially normal anti-double-stranded DNA antibody level, implying that inflammatory risks related to SLE were less likely to be causative.