Copyright: © © 2021 Syed Muhammad Zubair. This is an open-access article distributed under the terms of the Creative Commons Attribution License, which permits unrestricted use, distribution, and reproduction in any medium, provided the original author and source are

Hemorrhage, cerebellar herniation, and cerebral venous thrombosis in a patient with naegleria fowleri: A rare presentation.

Treatment for primary amoebic meningoencephalitis (PAM) was started. However, GCS worsened, and he was transferred to ICU. MRI brain showed flow in a bilateral anterior cerebral artery, middle cerebral artery, and the internal carotid artery. Appearances were likely secondary to extremely sluggish flow/vasculitis phenomenon likely cerebral venous thrombosis (CVT) along with marked cerebellar tonsillar herniation. The patient expired the next day. This is an extremely unusual case of Naegleria fowleri presenting with hemorrhage, cerebellar herniation, and cerebral venous thrombosis in a patient

Case presentation
A 26-year-old man presented to the Emergency Department with a 4-day history of high-grade fever, vomiting, and altered level of consciousness. The fever and vomiting had no known triggers and were associated with two episodes of generalized tonic-clonic seizures. His review of systems along with past history of similar symptoms and exposure to ponds or swimming pools was unremarkable. The patient was a non-smoker, with no known comorbidities, allergies, prior hospitalizations, or surgeries. The patient was not taking any medications. His family history was also non-significant. Examination of the patient revealed an agitated young man, with a blood pressure of 140/85 mmHg, heart rate of 96 beats per minute, respiratory rate of 33 breaths per minute, oxygen saturation of 95% on room air, and a GCS score of 10/15. Chest and abdominal examinations were unremarkable. Due to his low conscious level, he was electively intubated and placed on mechanical ventilation.

Treatment
The patient was initially started on Ceftriaxone, Vancomycin, and Acyclovir considering the differential diagnoses. However, soon after the CSF studies were reported, he was started on treatment for Primary Amoebic Meningoencephalitis (PAM) which included Amphotericin, Fluconazole, Rifampin, Miltefosine, and Azithromycin. 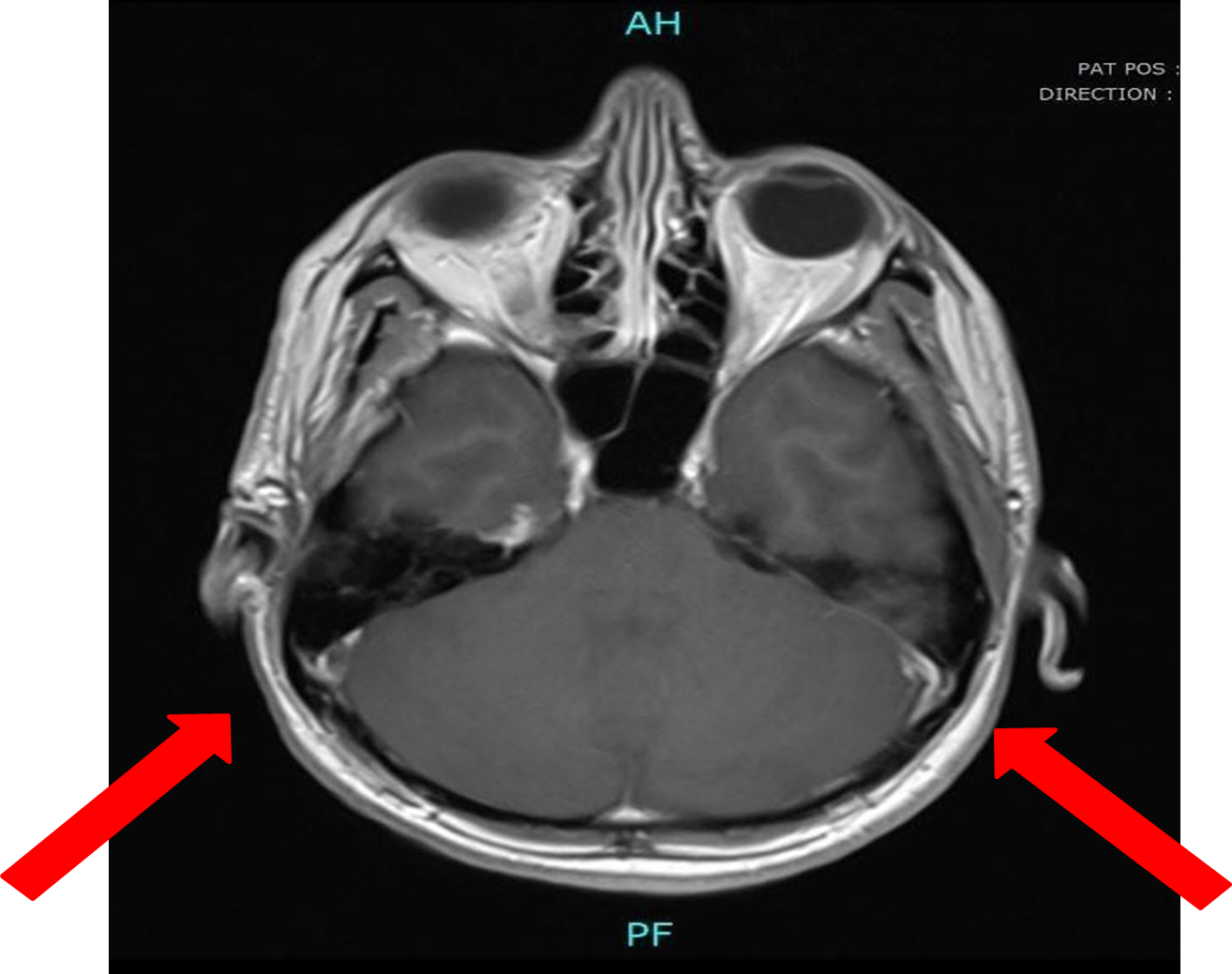 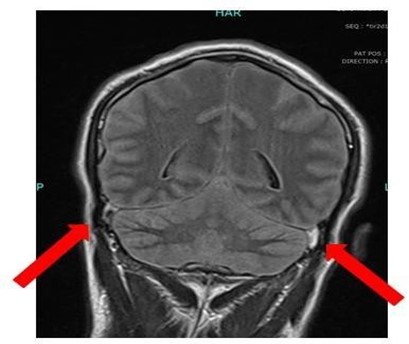 Outcomes and follow up
The patient’s condition deteriorated on thenext day of ICU admission. His GCS dropped from 10/15 to 3/15. Pupils became fixed and dilated. Urgent magnetic resonance imaging of the brain with contrast was done which showed diffuse cerebral and cerebellar edema with effaced basal cisterns with marked cerebellar tonsillar herniation. There was significant thinning of all dural venous sinuses with loss of flow void. There was a loss of flow voids in the bilateral anterior cerebral artery, middle cerebral artery, and internal carotid artery. Appearances were likely secondary to extremely sluggish flow/vasculitis phenomenon likely cerebral venous thrombosis (CVT). Abnormal T2/FLAIR hyperintense signals are noted in right inferior frontal gyrus with some signal dropout on SWI suggesting hemorrhagic infarct. The patient, however, did not survive and expired on the next day of admission.

Discussion
Naegleria fowleri is a thermophilic ameboflagellate protozoan parasite globally distributed in water and soil that lives in temperatures above 30°C. Naegleria fowleri is known to cause PAM which is a highly fatal disease with only 7 survivors to date [1]. Activities such as swimming, diving, exposure to hot springs, and facial contact with mud have been reported to cause PAM [2]. Tap water exposure for ritual purposes and nasal irrigation has also been reported as a cause of PAM [3].

Our patient had no history of a recent visit to a pool, lake, or hot springs hence nasal irrigation or ablution may be the likely cause in our case. J.S. Yoder et al studied 111 cases of Naegleria Fowleri in the USA from 1965 to 2008. Out of 111 cases, only one patient survived. The majority of the patients were young males [4]. Yasuo et al described a case of a young woman who came to the outpatient clinic with a severe headache. Her computed tomography scan of the head showed obstructive hydrocephalus. She was later diagnosed with PAM caused by Naegleria fowleri and died few days after the diagnosis [5].

In our patient computed tomography scan of the head was done initially and MRI brain was done later but none of them showed any signs of hydrocephalus. Darin et al described a case of two children. Two young boys were admitted with complaints of severe headache and neck stiffness. Both of the deteriorated rapidly and died within 48 hours of admission secondary to transtentorial herniation caused by the mass effect of inflammation, edema, and hemorrhage with a displacement of the brain stem. Histopathologic and immunochemistry analysis of brain tissue revealed the presence of Naegleria trophozoites in both cases [6]. Our patient also had rapid deterioration within 36 hours of admission. MRI brain showed cerebellar tonsillar herniation. Paola et al described the first case of PAM in Italy caused by Naegleria fowleri in a Young boy aged nine years. His condition deteriorated rapidly, and he required mechanical ventilation. CT scan head was done which showed right frontal lobe lesion and diffuse cerebral edema, the patient expired after 6 days of admission [7]. Minhua et al described a case of a 43-year-old male who was diagnosed with PAM and had rapid clinical deterioration. CT scan head showed hydrocephalus, brain swelling, hyperdense interhemispheric fissure cistern, and supra sella cistern sign that confirmed cerebral hernia and meningoencephalitis [8]. Rikesh Baral and Binit Vaidya discussed a case of a male who was initially managed as herpes encephalitis on the basis of clinical and radiological grounds. MRI brain showed edema and temporal lobe lesion (T1 hypo and T2 hyperintense) with few areas of micro-hemorrhages suggestive of cerebritis likely Herpes.

Patient initially improved but later deteriorated and an excisional brain biopsy was done which showed Naegleria fowleri [9]. There are no specific brain imaging features in patients with PAM caused by Naegleria fowleri. P. Singh et al described a spectrum of brain imaging findings in patients diagnosed with amebic meningoencephalitis. He described five cases, four of which were of granulomatous amebic encephalitis and the last one was of PAM. They described that brain imaging findings are nonspecific in PAM and have rarely been defined. Computed tomography scans and MRI are usually normal initially  as was in our case. However, later in the course of the disease brain edema, hydrocephalus, obliteration of cisterns with enhancing basilar exudates, infarction of basal ganglia and cerebral infarction have been defined  [10].

Our case is one of the rarest cases in the world as it defines the versatile radiological manifestations in a single patient with PAM caused by Naegleria fowleri. Radiological manifestations in our case were secondary to the extremely sluggish flow/vasculitic phenomenon likely due to cerebral venous thrombosis (CVT). Abnormal T2/FLAIR hyperintense signals were noted in right inferior frontal gyrus with some signal dropout on SWI suggesting hemorrhagic infarct which is again in favor of CVT. Although magnetic resonance venography was not done  in our patient, which is highly sensitive at diagnosing CVT, the sluggish flow with vasculitis phenomena is highly suggestive for a diagnosis of CVT.

Our case is a unique presentation of PAM with CVT along with hemorrhage, cerebral edema, and herniation. To the best of our knowledge, these radiological complications  have  not   been   reported in the literature so far and the causes that lead to the development of cerebral venous thrombosis in a patient with PAM is yet to be established. The infection may trigger thrombosis directly by causing septic thrombosis or indirectly by precipitating thrombosis in patients already at risk of thrombosis due to predisposing thrombophilia. [11] However, further information regarding how this amoeba causes CVT must be looked into to reduce mortalities due to suchinfection.

Acknowledgments
We are grateful to all the doctors, nurses laboratory technicians who helped manage this patient. We highly acknowledge the relative of the deceased for consenting to have this case report published.