Copyright: © 2022 Ahmad Argabi & Sultan Khalid Kadasah. This is an open-access article distributed under the terms of the Creative Commons Attribution License, which permits unrestricted use, distribution, and reproduction in any medium, provided the original author a

3Department of Otolaryngology and head and neck surgery, Aseer Central Hospital instead of Abdulrhman

Abstract
Glomus tympanicum is the most common benign middle ear tumor, with an excellent prognosis if caught early They are innervated by PANS and emerge from paraganglionic tissue. Females are more likely to have them. These tumors spread in multiple directions at the same time. They could be symptomless or have pulsatile tinnitus. The eardrum has a rising sun or setting sun look on inspection. A soft tissue mass lateral to the cochlear promontory can be seen on a CT scan, which may occupy the middle ear cavity. The treatment of choice is surgical resection.

Introduction
Glomus tympanicum is a middle ear tumor that is extremely rare, benign, locally invasive, and slow-growing. It is the second most frequent tumor of the temporal bone and the most common primary neoplasm of the middle ear [1]. Paragangliomas arise from the neural crest and are characterized by the proliferation of paraganglion cells in a highly vascular environment. These cells are most prevalent in the adrenal glands and are generally connected with elements of the autonomic nervous system throughout the body. Pheochromocytomas are a neoplastic proliferation of paraganglion cells that arise from the adrenal glands, whereas extra-adrenal paragangliomas are most commonly detected in the head and neck and are known as chemodectomas and glomus tumors [2]. The paraganglia are a collection of specialized organs (chemoreceptors) found throughout the body. The adrenal medulla, chemoreceptors (carotid and aortic bodies), vagal body, and tiny clusters of cells in conjunction with the head and neck and thoracoabdominal autonomic ganglion cells make up the paraganglion system [3]. A neural crest origin, a link to parasympathetic nerve fibers (parasympathetic innervation), a comparable function, and essentially the same histologic and histopathologic pattern are all shared by these organs [4].

Case report
A 55-year-old female with underlying hypertension and diabetes mellitus presented to our institution with a history of right ear pulsatile tinnitus and progressive right side hearing diminution for 10 years duration. No current symptoms of rapid heartbeat, sweating, headaches, flushing, and diarrhea. On examination, the patient looked well and comfortable. Normal head and neck finding without any visible or palpable swelling, deformities, or evidence of seventh or other cranial nerve deficiency. On nasal endoscopy, neither enlarged turbinates nor nasopharyngeal mass was visible. The oral cavity was unremarkable. On otoscopic examination of the right ear, there were no evident abnormalities regarding the external ear or external auditory canal, but a reddish pulsatile mass was seen through the anterior-inferior quadrant of her right tympanic membrane with a bulging tympanic membrane. Otherwise, TM appeared normal. The left ear was normal. Tuning fork tests showed Rinne's negative in the right ear and Weber’s test showed lateralization to the right ear. Systemic examination of the patient was unremarkable. Pure tone audiometry showed a mild conductive hearing loss pattern in the right and left ears were normal. (Figure 1). A CT examination of the temporal bones revealed a slightly thickened right tympanic membrane, 0.5 x0.5x0.5 CM protruding into the external ear. Minimal right mastoiditis, otherwise, clear middle ear cavities and mastoid air cells with an intact ossicular chain. Normal appearance of the internal auditory canal and inner ear structures on both sides. These findings were suggestive of glomus tympanicum. Consequently, it was classified as class A using the Fisch-Mattox classification and type 1 using the Glasscock–Jackson classification (Figure 2). MRI with IV contrast of internal auditory meatus revealed the normal appearance of inner ear structures, middle ear cavities, and mastoid air cells bilaterally (Figure 3). CTA Carotids showed a normal finding with no evidence of arterial stenosis, occlusion, aneurysmal dilatation of AV malformations. No neck masses or lymphadenopathy.

For this small glomus tympanicum tumor, A right ear transcanal microscopic resection was performed, annulas and TM were retracted superiorly, A pulsatile middle ear mass was identified at anterio- inferior quadrant, excision of the mass with cauterization of feeding vessels at hypotympanicum were done. The middle ear was examined, cochlea, semi-circular canals, and facial nerve canal were intact. Letter on, the Small perforation in TM was closed using temporalis fascia graft With minimal intraoperative bleeding (Figure 4). Histopathology reports of the excised tissue revealed an extensively crushed and compressed scant tissue focally covered by a thick fibrous capsule. Tumor is consist of a vaguely compressed organoid group of cells, separated by fibrovascular septae. Cells have round to oval nuclei, open vesicular chromatin and inconspicuous nucleoli. Tumor cells are positive for synaptophysin, chromogranin, vimentin, and negative for CD34, PR, CKAE1/AE3. KI 67 proliferation marker is approximately 1%. Morphologic features and immunophenotyping are compatible with middle ear paraganglioma. Postoperatively , the patient was vitally stable, cavity was clean, dry, graft in place and intact. therefore, she was discharged and is currently on regular follow-up with no worsening symptoms. 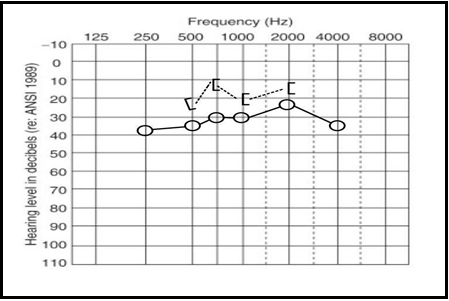 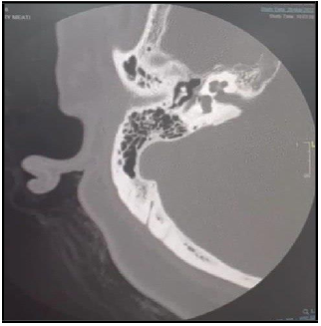 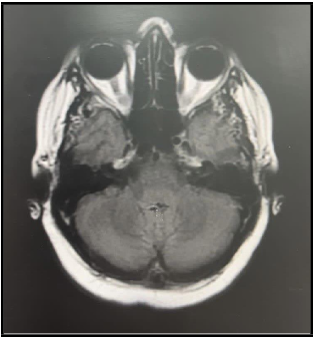 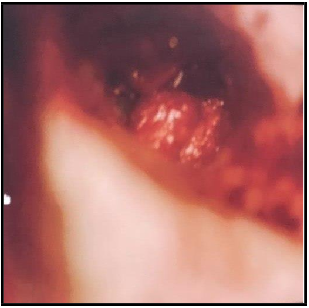 Figure 4: During transcanal microscopic resection, A red middle ear mass was identified under anterio-inferior quadrant of the tympanic membrane.

Discussion
Glomus tumor is more predominant in a female with a female: male incidence ratio of 4:1, and an average age of 50-60 years at the time of presentation [5]. During the initial evaluation, the most common complaints are pulsatile tinnitus, conductive hearing loss, and Aural fullness [6]. Sensorineural hearing loss can be seen rarely in case of neoplastic invasion of the inner ear, and in case of tympanic membrane invasion aural hemorrhage can be observed [5], other complaints may involve facial palsy, otalgia, otorrhea [2].

A pulsatile reddish-blue mass can be recognized on otoscopic examination behind the tympanic membrane, a positive Brown’s sign mean that the mass is directly in contact with the tympanic membrane when blanching is seen with pneumatic pressure [5]. in addition, baseline audiometry should be obtained to assess hearing, and to evaluate the degree of tumor extension in case of hearing impairment [2].

Imaging modalities include computerized tomography scans (CT scans), magnetic resonance imaging (MRI), and conventional angiography. A High-resolution CT scan is the preferred modality to diagnose Glomus tympanicum. It’s best to evaluate bony destruction and erosion [2]. Glomus tympanicum appears as a soft tissue mass lateral to the promontory, which may fill the middle ear cavity [7]. MRI is better than CT when assessing the soft tissue component of a tumor, demarcating its borders and intracranial extension. The characteristic feature of glomus tumor on MRI is the "salt and pepper appearance on T1-weighted signal. In addition, MRI is beneficial to differentiate glomus tumors from trapped secretions in the temporal bone. conventional angiography is an old modality that is replaced currently by CT and MRI in most cases [8]. Angiography recognizes multicentric tumors, and intravenous and intrasinus extension and could be useful in pre-operative feeding vessel embolization, diminishing the need for blood transfusion, and aiding the procedure with greater safety [6,9]. Tumor staging is an essential component of the diagnostic algorithm for GT tumors and necessary for surgical approach selection and provides standards for surgical results reporting ‘Glasscock and Jackson and ‘Fisch and Oldering’ are presently popular classifications for glomus tumors. The Fisch- Mattox system integrates both jugular and tympanic paraganglioma into one grading system [10]. Glasscock and Jackson’s system classifies glomus tympanicum using the extent of involvement and involved area into 4 types. In type 1, the margins of the glomus tympanicum are completely visible on otoscopy and limited to the promontory. Type 2 indicates a tumor filling the middle ear. Type 3 denotes further tumor extension into the mastoid, while type 4 glomus tympanicum outspreads through the tympanic membrane into the external auditory canal [5].

Treatment of Glomus tympanicum could be palliative or curative. Palliative treatment includes observation or radiotherapy. Curative treatment is surgical. Frequent treatment is complete surgical resection. Transcanal approach, postauricular approach, canal wall up mastoidectomy with posterior tympanotomy, canal wall up mastoidectomy with posterior tympanotomy and subfacial recess tympanostomy, and subtotal necrosectomy with middle ear obliteration are some of the approaches and strategies [11]. Depending on the type, size, and location of the tumor, the patient's state, and the surgeon's expertise, these surgeries may be used. Previously, these surgeries were often conducted under a microscope. Transcanal endoscopic ear surgery has recently gained popularity as a therapy option for persistent otitis media [11,12]. Regarding Glasscock–Jackson classification, Type 1 glomus tympanicum are usually approached by trascanal tympanotomy, Type 3 tumors necessitate mastoidectomy with an extended facial recess approach, and Type 4 glomus tumors require intracranial surgical excision of the tumor [13].

Conclusion
Glomus tympanicum are benign tumors of the middle ear that frequently result in pulsatile tinnitus, conductive hearing loss, and Aural fullness. It is more predominant in a female with a female-to-male ratio of 4:1, peaking at age of 50-60 years at the time of presentation. Treatment options include observation, radiotherapy,and surgical excision. Microsurgical resection is the treatment of choice. The appropriate management approach depends on the patient's condition, the extent of the glomus tumor, and the surgeon's expertise.

Consent: Written informed consent was obtained from the patient who participated in this study.

Conflicts of Interest: The authors declare that there are no conflicts of interest, regarding the publication of this article

Ethical approval: The case report was approved by the Institutional Ethics Committee

Acknowledgments: We would like to thank all otolaryngologist radiologists, OR teams, and histopathologists in Armed Forced Hospital Southern Region.