Copyright: © 2022 Mylapore Vajravelu Sureshkumar, M.B.B.S., D.C.H. This is an open-access article distributed under the terms of the Creative Commons Attribution License, which permits unrestricted use, distribution, and reproduction in any medium, provided the origin

Abstract
Granulomatosis with Polyangiitis (GPA) affects nearly every organ system in the body. Cardiac involvement with GPA, particularly intracardiac masses, is a very unusual occurrence. The present case report demonstrates the diagnosis and successful treatment of an intracardiac mass in GPA with multiorgan involvement.

History of presentation
A 23-year-old male presented to a family physician’s clinic with complaints of recurrent upper respiratory tract infections, bilateral eye congestion, gangrenous lesions on the toes of his right leg, and nodular skin lesions over both the elbows (Figure 1). On examination, the patient was anemic, anicteric, and had bilateral scleroconjunctival congestion. No regional lymphadenopathy or facial deformities were noted. He was hospitalized for further evaluation and management. 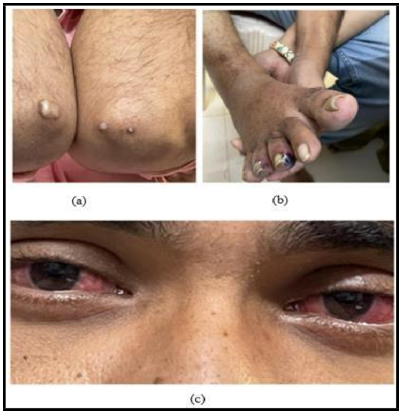 Figure 1: Clinical presentation (a) Nodular lesions over both elbows (b) Gangrene on third and fourth toe of right leg (c) Bilateral scleroconjunctival congestion.

Past Medical History
The patient had a history of sinusitis coupled with hemoptysis, spontaneous nasal bleeding, and mastoiditis unresolved with antibiotics. No records of drug exposure, drug addiction, or family history of similar diseases were noted.

Excision biopsy of the skin lesion on the elbows depicted necrobiotic interstitial granulomatous dermatitis with sinus tract formation and suppuration. Biopsies of skin lesions indicated that they were a part of a systemic connective tissue disease and not infection. Computed tomography (CT) of the paranasal sinuses (Figure 2) showed left maxillary sinusitis, minimal mucosal thickening in the right maxillary sinus, and deviated nasal septum to the left. Concha bullosa of the left middle turbinate opacified osteomeatal complex on the left side, soft tissue density in bilateral mastoid air cells, and middle ear otomastoiditis were also noted. 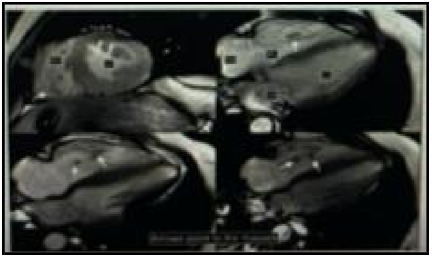 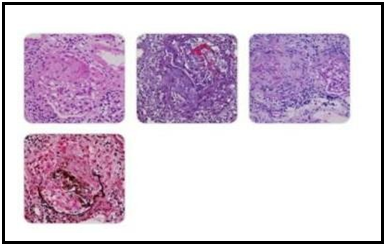 The patient developed swelling in right foot with cellulitis and progressive worsening of gangrene. Complete thrombus of right tibial artery was seen, along with cellulitis on the right foot, with an acute thrombus causing complete vascular lumen obliteration.
Subsequently, the patient was readmitted following complaints of chest pain and respiratory distress. ECHO was repeated, Doppler revealed deep vein thrombosis, and CT pulmonary angiography confirmed pulmonary embolism in the patient (Figure 5). 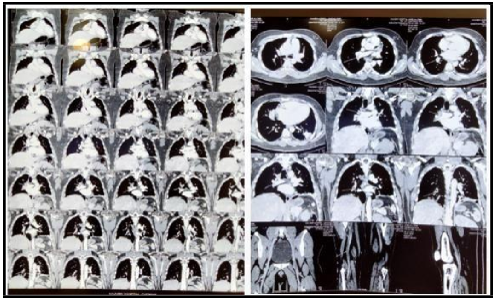 Differential diagnosis
Cardiac MRI characterized the mass as a pedunculated, narrow base with free movement, multiple, and attached to the chordae tendinae of the tricuspid valve without any edema. These features did not align with adipose tissue myxoma, malignancy, or granuloma. Therefore, the intracardiac mass was most likely a thrombus or fibroelastoma.

Blood cultures taken during the patient’s admission were reported negative, excluding infective endocarditis. The following conditions were ruled out based on patient history and clinical presentation: antiphospholipid syndrome (no history of blackish discoloration of the limbs, pain, or swelling); tuberculosis (absence of fever, night sweats, loss of weight, and negative TB quantiferron); congestive cardiac failure (no history of breathlessness on exertion, lying down, no fatigue, or nocturnal cough) and conduction disorders (no history of syncope, palpitations, and chest pain). Despite the ocular and dermal changes, sarcoidosis was ruled out due to the absence of lymphadenopathy.

Management
The patient was treated with immunosuppressive medications comprising cyclophosphamides and corticosteroids. Plasmapheresis was initiated, followed by treatment with anticoagulants for deep vein thrombosis (DVT) and pulmonary embolism (PE), along with supportive care. With treatment, he recovered his renal function, and venous thrombosis was resolved with the complete disappearance of the intracardiac mass without any surgical intervention (Table 2).

Discussion
GPA affects nearly every organ system in the body, with the respiratory and renal systems being the most affected. Symptoms can range from mild conjunctivitis and episcleritis to more severe inflammation such as keratitis, scleritis, uveitis, and retinal vasculitis. Ocular involvement was recorded in about 50-60 % of cases, with 8-16 % of patients presenting at the time of diagnosis [1]. ENT manifestations are frequently the initial symptoms, with sinonasal symptoms (52 %) being the most common, followed by otological indications (32 %) [2]. Skin problems like petechiae or purpura (16 %), painful skin lesions (9.4 %), and maculopapular rash (6.7 %) were most prevalent in GPA [3]. According to Bünyamin Kisacik et al. study, unusual symmetrical polyarthritis of the small joints was observed in patients with GPA, showing the impact of GPA on joints [4].

Cardiac involvement with GPA has been reported, and mostly includes pericarditis (50 %), myocarditis (25 %), endocarditis (21 %), and conduction system anomalies (17 %) as the most common abnormalities. However, the occurrence of cardiac masses in GPA is rare. The case discussed is unique, as it involves multiple systems and includes an intracardiac mass. Based on the patient’s presentation, history of repeated upper respiratory tract infections, and chronic sinusitis, vasculitis, positive ANCA [5], renal and cardiac involvement, a diagnosis of GPA was made.

The patient had a rare cardiac manifestation of GPA, which presented itself as three extremely mobile masses linked to the tricuspid valve. Following a cardiac MRI, aberrant tissue was identified as three tiny masses that were cleared following dalteparin treatment. This demonstrates that all intracardiac masses are not atrial myxomas and can be treated without surgery. The intracardiac mass of the current case was a thrombus, which was eliminated with an anticoagulant. As thrombus is present, GPA should be considered in the differential diagnosis of any intracardiac masses.

Follow-up
No further complications related to GPA or reappearance of intracardiac mass were noted on the follow-up consultation 3 months post-discharge. Presently, the patient is on oral corticosteroids and monthly cyclophosphamide and is doing well.

Conclusions
This case demonstrates a unique medical approach taken for diagnosis and successful treatment of an intracardiac mass in GPA with multiorgan involvement. The presence of an intracardiac mass in GPA is a rare entity and this condition is often linked with poor prognosis, but timely intervention and accurate diagnosis can result in better clinical outcomes.

Disclosures: The author reports no conflicts of interest in this work.