Copyright: © © 2021 Oumerzouk Jawad. This is an open-access article distributed under the terms of the Creative Commons Attribution License, which permits unrestricted use, distribution, and reproduction in any medium, provided the original author and source are credi

Chronic inflammatory bowel disease and demyelination of the central nervous system: A report on 2 cases

Introduction: CNS demyelinating disorders in IBD are rare complications and are due to a day immune mechanism.

Clinical observations: We report the clinical cases of two patients followed for IBD. The first patient had Crohn's disease for 12 years and developed acute disseminated encephalomyelitis (ADEM) one month after the first course of anti-TNF-alpha (infliximab). The second patient, treated for ulcerative colitis with salazopyrin, developed multiple sclerosis (MS) 5 months after the start of her disease.

Discussion: MS and optic neuritis remain the inflammatory demyelinating diseases of the CNS most frequently associated with IBD. The activation of T lymphocytes during IBD plays an essential role in the pathogenesis of MS and ADEM is a genetically predisposed population.

Conclusion: It is currently recommended that patients with IBD be evaluated clinically and by MRI for subclinical demyelinating lesions in order to guide therapeutic management.

Clinical Case 1
We report the clinical history of a 45-year-old patient, followed up for 12 years for Crohn's disease. The patient was initially treated with sulfasalazine during the first two years of the disease and then, following an exacerbation of the disease, with azathioprine 100mg/d and prednisolone 80mg/d. The evolution was marked by a stabilization of the disease with the occurrence of complications of long-term corticosteroid therapy including adrenal insufficiency and steroid-induced diabetes for which he was placed on hydrocortisone and insulin therapy. However, given the persistence of active and fistulizing bowel involvement on thoraco-abdominopelvic computed tomography, the patient was started on anti-TNF-alpha (infliximab), after gradual reduction of oral corticosteroid therapy. The evolution was marked one month after the first infliximab treatment, by the rapidly progressive onset over 5 days of weakness on the right side of his body with dysarthria, in a context of apyrexia without constitutional symptoms. The patient did not report any history of infection or vaccination in the month preceding the onset of this clinical picture. The neurological examination showed a spastic right hemiparesis, predominantly in the right lower limb with bilateral Babinski, and the fundus showed signs of periphlebitis in the peripheral retina. Brain MRI showed a left capsule-thalamo-lenticular lesion with poorly defined margins, which appeared hypointense on T1 and hyperintense on T2, FLAIR, and diffusion sequences. The lesion was not enhanced after injection of contrast medium and exhibited hemorrhagic changes with significant perilesional edema exerting a discrete mass effect on the ventricular system. A second lesion was noted at the right capsule- lenticular level, of smaller volume, also with hemorrhagic changes (Figure 1). The Spectro-MRI data were compatible with an inflammatory process and the angiographic sequences did not show venous thrombosis or signs of cerebral vasculitis. At this stage, in consultation with the neuroradiologist, we considered the diagnoses of acute disseminated encephalomyelitis (ADEM) and certain opportunistic infections, notably cerebral toxoplasmosis. The spinal cord MRI was unremarkable, and the lumbar puncture showed aseptic lymphocytic meningitis with 73 white blood cells/mm3 (100% lymphocytes), 0 red blood cells, elevated CSF proteins of 0.70 g/l, CSF glucose of 0.87g/l (glycemia=1.47 g/l) without intrathecal synthesis of immunoglobulins. Inflammatory and immunological tests, a biopsy of the accessory salivary glands, angiotensin-converting enzyme assay, viral and toxoplasmosis serologies, PCR for Mycobacterium tuberculosis, and the rest of the biological work- up were unremarkable. The diagnosis of ADEM associated with Crohn's disease was retained and the patient received a bolus of methylprednisolone 500mg/d for 6 days, followed by oral corticosteroid therapy (prednisolone 40 mg/d) with progressive tapering over 5 weeks. The clinical evolution was marked by the progressive recovery of muscle strength on the right side of the body, and the control brain MRI, 1 month after the halt of oral corticotherapy showed almost complete disappearance of the lesions previously found. The biotherapy was stopped and the decision to restart it was deferred. 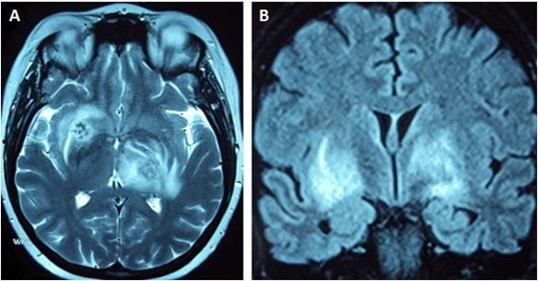 Figure 1. Brain MRI, T2 (A) and FLAIR (B) sequences, showing bilateral and asymmetric, poorly demarcated T2 and Flair hyperintensities in the left thalamo-capsulo-lenticular and right capsulo-lenticular areas, with hemorrhagic changes.

Clinical Case 2
This is a 32-year-old patient, followed for 5 months for ulcerative colitis under salazopyrin, and admitted to the emergency room with a gait instability of rapidly progressive onset over a week and accompanied by rotatory vertigo. The patient also presented a spontaneously regressive episode of numbness with paresthesias of the left lower limb lasting one month. Clinical examination found a statokinetic cerebellar syndrome, a left-lateralized central vestibular syndrome with an extrapyramidal syndrome. The fundus was normal and magnetic resonance imaging showed multiple T2 and FLAIR signal intensities of the white matter in the frontal, bilateral parietal, occipital, corpus callosum, and inferior cerebellar peduncle, without contrast (Figure 2). These radiological images were suggestive of a demyelinating disease such as multiple sclerosis. The spinal cord MRI was unremarkable, and the lumbar puncture showed clear fluid with 2 white blood cells/mm3, 0 red blood cells, a protein level of 0.24 g/l with intrathecal immunoglobulin synthesis; the visual evoked potentials were unremarkable. The immunological and inflammatory workup, as well as the rest of the biological workup, was unremarkable. The patient received a bolus of methylprednisolone at a dose of 3g, then was placed on a disease-modifying treatment, interferon β 1a. The evolution was marked by the regression of the cerebellar syndrome and vertigo, without neurological or digestive relapse with an aborted progression of the disease for 18 months.

Discussion
Neurological complications of idiopathic chronic inflammatory bowel disease (IBD), with an estimated prevalence between 47 and 50 % depending on the series, normally appear after the diagnosis of IBD, coinciding or worsening with the exacerbation of IBD. [1,2,3] This neurological involvement is often related either to a day's immune mechanism or to a prothrombotic state. [4,5] However, multiple sclerosis (MS) and optic neuritis remain the most common inflammatory demyelinating diseases of the central nervous system (CNS) associated with IBD. [1,6,7]

This is explained by the disruption of T cell function, as well as that of antigen-presenting cells, which is common between the 2 diseases. [1,2,8,9] Therefore, cellular immune-suppressive therapies are effective in treating both diseases. [10,11] Activation of these T cells against the major determinants of myelin (myelin basic protein; MBP, proteolipid protein; PLP and myelin oligodendrocyte protein; MOG), through a mechanism of molecular mimicry (cross-immune response), also plays an essential role in the pathogenesis of ADEM. [3,4,12]

\In addition, proinflammatory cytokines (TNF-α, interleukin-2, and interferon-γ) associated with IBD, may be a potential etiological factor in ADEM. [4] Therefore, IBD may represent a chronic pre-demyelinating condition and the equivalent of a triggering factor, and ADEM may represent an extraintestinal manifestation of IBD, through cross- autoimmunity. [5,11]

However, it is still initially difficult to differentiate between CNS involvement secondary to cerebral vasculitis lesions involving small vessels, cerebral venous thrombosis, and primary CNS demyelination associated with IBD. [2,3,8,9] Cases of necrotizing vasculitis may result in forms similar to acute hemorrhagic encephalomyelitis, a variant of ADEM.

[5] In addition, animal studies have shown that demyelinating lesions such as MS or ADEM in IBD patients correspond to lesions of cerebral venous thrombosis. [3,5,9] Perivenous demyelination is thought to be secondary to edema following blockage of venous drainage. [11]

Finally, demyelinating lesions of the CNS pose a problem of differential diagnosis with demyelinating lesions secondary to the use of immunosuppressants and immunomodulators, and with demyelinating lesions secondary to opportunistic infections in these immunocompromised patients. [1,2,3,8] In fact, biotherapy (anti-TNF- alpha) may be responsible for the onset or worsening of CNS demyelinating disease in genetically predisposed individuals, opportunistic infections, or reactivation of latent infections, as well as thromboembolic complications and cerebral vasculitis. [4,7,12] The time interval between the start of anti-TNF-alpha administration and the onset of neurological symptoms is highly variable, with an average of 5 months. [11] In fact, TNF-alpha, which is a pro-inflammatory cytokine that plays a pivotal role in chronic inflammatory reactions in the gut and brain, is essential for CNS remyelination in the late stages of the disease through anti-inflammatory action, and suppression of TNF-alpha action may therefore potentiate inflammation and demyelination [5,8,11] It is currently advocated that before initiating anti-TNF-alpha therapy in patients with IBD, they should be well evaluated neurologically, clinically and with MRI, for subclinical demyelinating lesions. [12]

Conclusion
In conclusion, in our patient followed up for active Crohn's disease, ADEM could be secondary either to a cross immune reaction coinciding with the worsening of IBD or a side effect of biotherapy, given the time interval between the beginning of treatment and the neurological symptoms. It would be plausible to stop the biotherapy and discuss other therapeutic alternatives.

Conflicts of interest: The authors declare that they have no conflict of interest.