Copyright: © 2022 Khadija laasri. This is an open-access article distributed under the terms of the Creative Commons Attribution License, which permits unrestricted use, distribution, and reproduction in any medium, provided the original author and source are credited

Abstract
We report the case of a 24-year-old man with a history of amputation of the left ankle for chondroblastic osteosarcoma; the patient received adjuvant chemotherapy, in whom the last control CT scan revealed the appearance of new bone lesions, whose appearance in MRI is suggestive of a bone infarction "double line sign" on the T2-weighted image and normal internal marrow fat. Additional clinical history revealed chronic steroid usage. The clinical context, the location of the lesions, and the morphological aspect of MRI suggest bone infarcts without resorting to a bone biopsy. Bone infarction is often discovered on radiologic exams as incidental findings or as the causative agent in focused diagnostic workups. This may be confused with more neoplastic severe processes. This bone tumor mimics generally do not require an aggressive diagnostic work-up. Correctly identifying these lesions with a specific diagnosis minimizes the morbidity associated with diagnosing and managing aggressive and potentially malignant osseous processes. A sound understanding of the appearance of bone tumor mimics and their characteristic radiologic features is essential for optimizing diagnostic accuracy. In this article, we will discuss the imaging characteristics and differentiating imaging features, including findings seen on modalities that include conventional radiography, computed tomography (CT), magnetic resonance imaging (MRI), and skeletal scintigraphy.

Introduction
There is no precise definition of the term "bone infarct. "Traditionally, the term "bone infarct" is reserved for the death of bone and marrow tissue due to ischemia, without infection, and developing in the metaphysis and diaphysis of a long bone. The term "avascular necrosis" (AVN) or "osteonecrosis," which is also typically used to indicate ischemic cell death of the carpal and tarsal bones, refers to the same process that occurs at the epiphysis. Both "bone infarction" and "osteonecrosis" are used in the literature to describe ischemic aseptic cell death affecting flat bones, such as the pelvis, ribs, and skull. [1] Accidently, bone infarcts are usually radiological curiosities with no clinical implications. Although a radiological diagnostic is considered simple, errors are common, and some details still need to be completed. In reality, there is relatively little research on bone infarcts, which were first mentioned in the context of caisson disease and later outside of it in 1939. [1] Magnetic resonance imaging (MRI) appears to be the most sensitive diagnostic modality. We report a case of a 24-year-old with a history of amputation of the left ankle for chondroblastic osteosarcoma, in whom the last control CT scan revealed the appearance of new bone lesions, whose appearance in MRI is suggestive of a bone infarction.

Case Report
We report the case of a 24-year-old man who underwent a left lower leg amputation after being diagnosed with chondrosarcoma of the left tibia and fibula two years ago. He was then referred to our department for surveillance CT scans that showed no suspicious or progressive bone lesions. However, the last CT scan revealed in bone windows the appearance of new bone lesions within the distal femoral epiphysometaphyseal and proximal tibial metaphyses that are centrally located heterogeneous and largely sclerotic process that contains well-defined serpiginous margins (figure 1), with no cortical and periosteal involvement. Given the patient's context, a malignant origin is suspected, and MRI was suggested for further evaluation. MRI found the low signal intensity serpentine border on T1 and typical double line sign on the T2-weighted image, and regular internal marrow fat. Intravenous contrast-enhanced T1- weighted images demonstrate central low-density tissue surrounded by an enhancing rim (Figure 2). We diagnosed it as bone infarction because of the "double line sign" on the T2-weighted image and normal internal marrow fat. Additional clinical history revealed chronic steroid usage. 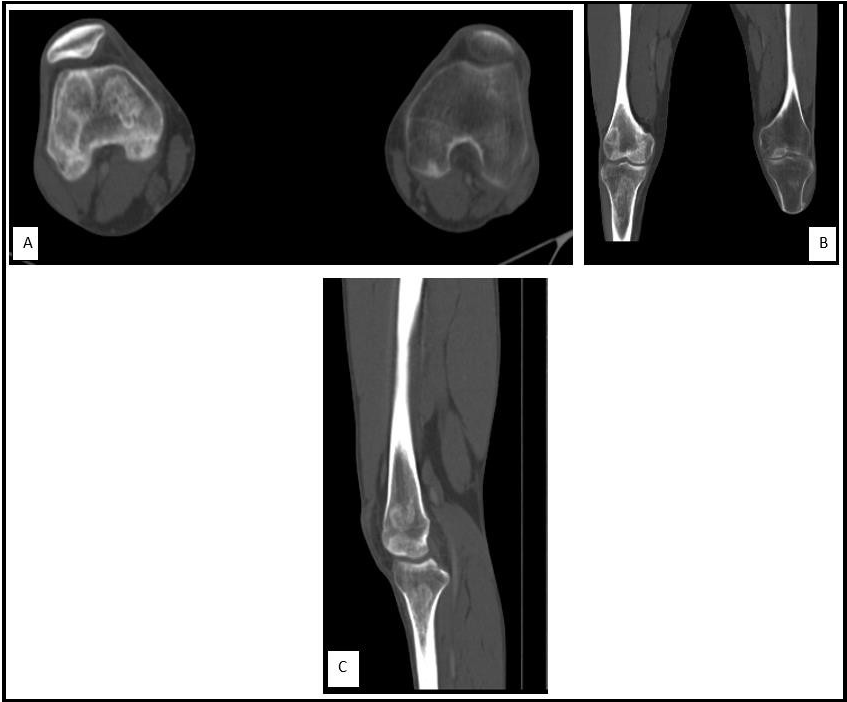 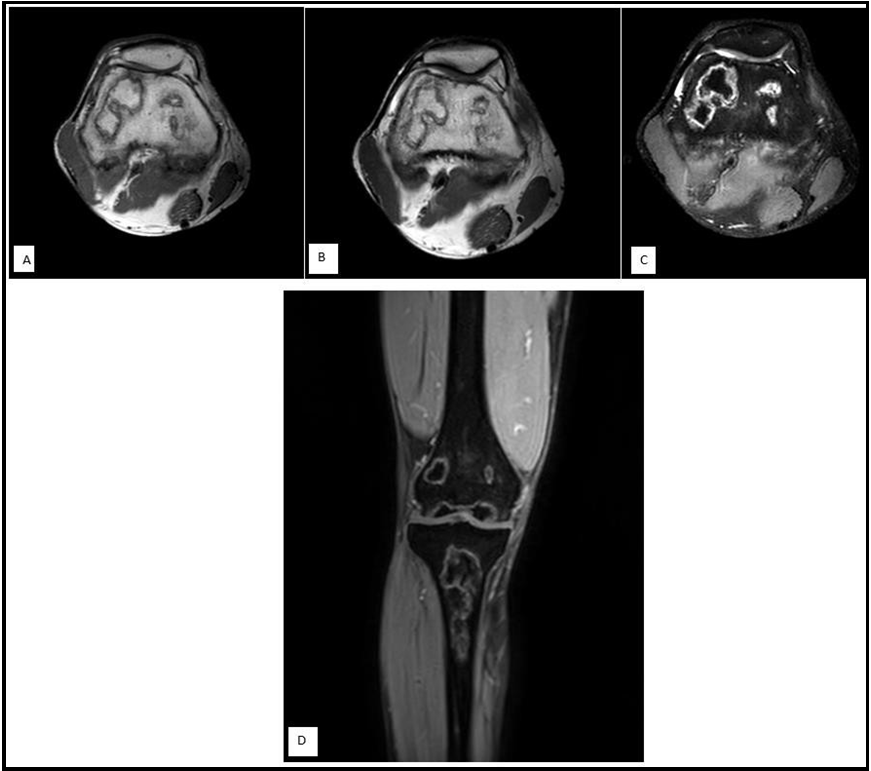 Discussion
Bone infarcts are mineralized nonviable medullary bone areas that can be associated with underlying diseases, such as caisson disease, sickle cell disease, systemic lupus erythematosus, Gaucher's disease, leukemia, or lymphoma. Apart from these diseases, corticosteroid therapy, the most frequently found risk factor, was reported relatively late. Corticosteroid therapy is found in more than half of the isolated cases published, such as in our case, and only 8 % of patients had risk factors. [1,5]

The prevalence of bone infarcts is unknown. Articles reporting isolated observations often present them as a rare or even exceptional condition. [3]

Bone infarcts are often asymptomatic; they can also be extremely painful when associated with sickle cell crises. [2]

The most frequent locations are, in descending order, the metaphyses or epiphysometaphyseal regions of the knee (distal femur, proximal tibia, proximal fibula), which alone account for 85 % of bone infarctions. The distal tibia and proximal femur follow them. Infarcts are exceptional in the upper limbs and, in this case, almost always located the proximal metaphysis of the humerus[3]. By definition, they are located in the metaphyseal regions, but they may extend more or less far into the epiphysis or the adjacent diaphysis. They are exceptionally pure diaphyseal [6]. Bone infarcts are usually multiple; this was reported in early publications, including Lafforgue's study, which reported 174 cases of bone infarcts detected in 51 patients, with only 14 patients (45 %) having a single location [1].

The diagnosis is based exclusively on imaging, especially MRI. Radiography of immature or early bone infarcts may show focal lytic or sclerotic lesions. Other nonspecific findings include a mottled bone rarefaction or moth-eaten appearance with or without mild reactive sclerosis. A mature infarct is usually surrounded by a well-defined, densely sclerotic, serpiginous border surrounding a radiolucent area. CT mirrors this mature infarct radiographic findings, is more sensitive in general for detecting smaller amounts of calcification and can be helpful when cortical involvement is in doubt radiographically. The classic result of chronic bone infarction is a lucent area in the medullary cavity with serpentine peripheral calcification. [4]

Some differential diagnoses must be discussed. Acute bone infarction can be confused with osteomyelitis or malignancy, especially if these conditions are clinically suspected. The absence of increasing infection or malignancy during routine follow-up imaging can also prove the diagnosis, even though a biopsy may be required for a proper diagnosis. [2,7] Infarct can be differentiated from enchondroma by the characteristic sclerotic and serpiginous border associated with infarct and the absence of endosteal scalloping, which is seen to different degrees in larger enchondromas as well as in chondrosarcomas. Chondrosarcomas are also associated with cortical destruction and soft-tissue masses, which are not associated with bone infarcts. [2,3]

The prognosis of bone infarcts is excellent. However, there have been a few isolated reports of bacterial infection at sites of bone infarction (osteomyelitis) [8] or malignant transformation into sarcoma or malignant fibrous histiocytoma. Finally [9,10], a cystic change without clinical translation is possible [11].

There is no specific treatment for bone infarcts. In the case of a sickle cell crisis, hypotonic fluids, fresh frozen plasma, and partial exchange transfusions may be indicated. [2]

Conclusion
Bone infarct is often asymptomatic, of incidental finding on imaging requested for another reason. This case illustrates the importance of the MRI appearance to establish the diagnosis and eliminate differential diagnoses, especially in the oncological context.

Author's Contributions: All authors contributed to this work. All authors have read and approved the final version of the manuscript.

Conflicts of Interest: The authors declare that there are no conflicts of interest regarding the publication of this paper.