Copyright: © 2022 Bishal Dhakal. This is an open-access article distributed under the terms of the Creative Commons Attribution License, which permits unrestricted use, distribution, and reproduction in any medium, provided the original author and source are credited.

Atypical Arrhythmogenic Ventricular Cardiomyopathy (AVC) or Something Else? A Case with Frequent Palpitations

Abstract
Arrhythmogenic right ventricular cardiomyopathy (ARVC) is a rare cardiovascular disorder characterized by cardiomyopathy, arrhythmia and frequently leading to sudden cardiac death (SCD). It affects the right ventricle most commonly. We present you with a rare case who came with a complaint of frequent palpitations. There was no relevant family history predisposing to ARVC. There were no typical ECG findings except for ventricular premature contractions. As the typical symptoms of ARVC were also not present in the case, it is necessary to understand the fact that atypical presentations are not uncommon and should undergo further evaluation.

Introduction
Arrhythmogenic right ventricular cardiomyopathy (ARVC) is a heart muscle disorder where ventricular myocardium (commonly right) is replaced by fibrous and fatty tissue [1]. In an editorial, its prevalence in adults was estimated to be 1 in 2000 to 1 in 5000 [2]. ARVC has been a common cause of sudden cardiac death in young adults, accounting for 20 % of fatality in young athletes [3]. The presentations in ARVC are variable, though patients can present with palpitations, chest pain, transient loss of consciousness, and shortness of breath. It has been one of the causes of arrhythmias and sudden cardiac death (SCD)[1].

ARVC is considered to be familial with autosomal dominant inheritance, although there are recessive forms (e.g., Naxos disease, Carvajal syndrome) that are associated with  a  cutaneous  phenotype [4]. The condition was initially believed to be a developmental defect of the RV myocardium, leading to the original designation of “dysplasia” [5]. Several cases have not been recognized because patients were asymptomatic until the first presentation with sudden death or were difficult to diagnose by conventional noninvasive methods [3]. Based on the recent classification of Task Force, due to unclear etiology ARVC is included in the cardiomyopathies section [6]. The clear aetiopathogenesis of ARVC is still unknown.

Case Presentation
A 35 years old male with no known co-morbidities presented to our center with the complaint palpitation for two weeks. He was admitted to the high care unit and evaluated. The palpitation was on and off affecting his sleep and daily activities. It was not associated with chest pain, orthopnea, and paroxysmal nocturnal dyspnea (PND). There was no history of fever, headache, nausea, and vomiting. He was a non-smoker and non-alcoholic. There was no past history of hypertension and diabetes mellitus and no similar family history.

On examination, his general condition was fair and good. There was no pallor, edema, or cyanosis. His blood pressure and pulse rate were normal manually. The cardiac auscultation was normal and there was no associated murmur. Bilaterally normal vesicular breath sound was heard in chest examination.

The laboratory values that were obtained are presented in Table 1 The initial electrocardiogram showed frequent ventricular premature contractions and prolonged QRS complex. On 24-hour Holter monitoring, the following results were obtained as in Table 2

The 2D-echocardiography showed normal chamber size with the wall thinning. There was left ventricular diastolic dysfunction with no associated regurgitation features. 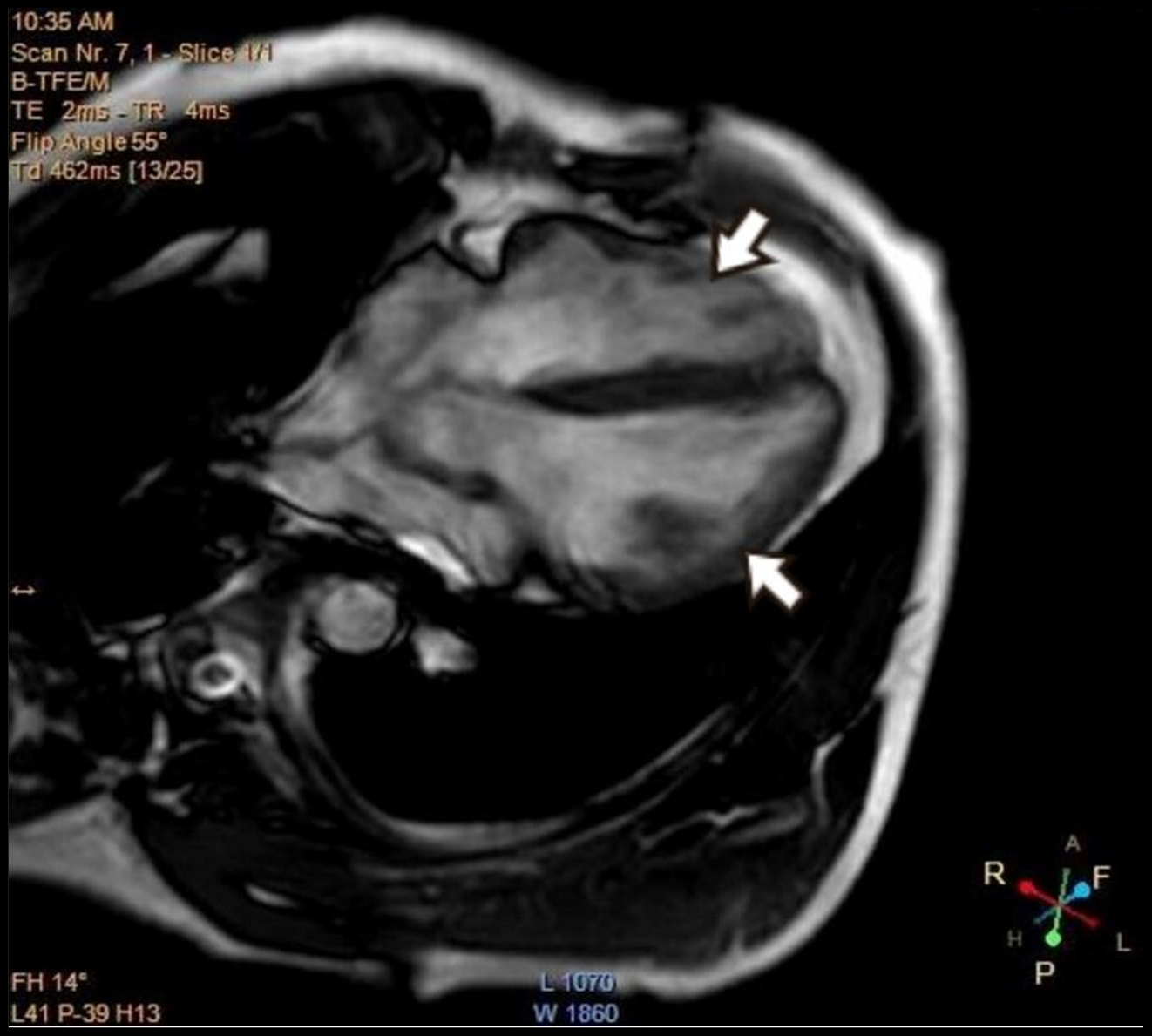 Legend: Arrows showing no evidence of cardiomyopathy or dyskinetic features

Legend: Arrows showing normal ventricles with no evidence of dilatation 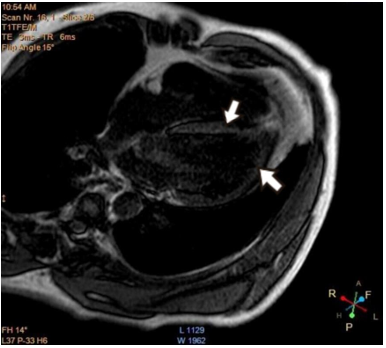 As there was the involvement of the left ventricle also in the delayed enhanced picture of cardiac MRI, we considered diagnosis as arrhythmogenic ventricular cardiomyopathy (AVC) with atypical cardiac imaging on the basis of clinical, electrocardiogram, 24-hour Holter, and minor cardiac MRI findings. Also, since it did not fit typically into the diagnosis of ARVC and other arrhythmogenic conditions, we also considered it as cryptogenic.

He was kept on metoprolol 25mg per oral once a day and later referred to the heart center for Implantable Cardioverter-Defibrillator (ICD) implantation.

Discussion
ARVC is an inherited heart disease associated with ventricular arrhythmias and sudden cardiac death. It manifests with a wide spectrum of manifestations from symptomatic patients to asymptomatic patients. There is now increasing evidence that the left ventricle is also being affected by the disease in its clinical and pathological course [7]. It is characterized as an autosomal dominant variant with a familial predisposition. However, the aetiopathogenesis is still unclear. A recent study suggests exercise has a significant role in the pathogenesis of gene-elusive ARVC. And as exercise has been found to have a role in its presentation and exercise restriction has been suggested for those having ARVC [8].

ARVC commonly manifests as ventricular arrhythmias, heart block (left bundle branch), electrocardiogram (ECG), and structural ventricular changes. However, these manifestations point towards only the disease spectrum extremes [6]. As most of the cases are asymptomatic, ARVC is difficult to diagnose at an early phase. Hence, the patients present with cardiac arrest or sudden cardiac death in most cases. A study conducted in Italy showed 20 % fatality with sudden death in young athletes having unknown ARVC [6].

International Society and Federation of Cardiology and European Society of Cardiology have formulated standardized diagnostic criteria for ARVC. In accordance with the Task Force guidelines, ARVC is diagnosed on the basis of the presence of major and minor criteria. The diagnosis of ARVC would be fulfilled with two major or one major plus two minor or four minor criteria [6]. A special report by Marcus et al have proposed modification for original Task Force criteria [4]. The diagnostic criteria for  ARVC  are shown in Table 3 [6].

The diagnosis of ARVC can be very challenging because the presentations are highly variable and no specific diagnostic tool has been specified for it. Mutations in genes encoding desmosomal proteins (including desmoplakin, plakoglobin, plakophilin 2, desmocollin 2, and desmoglein 2) have been identified in approximately 40% of patients with ARVC [9]. The use of Magnetic Resonance Imaging (MRI), ECG, and echocardiography in the diagnosis of advanced ARVC has been reported of high specificity and sensitivity but low for earlier or less conspicuous ARVC. An original article published in the New England Journal of Medicine (NEJM) found immune-histochemical analysis (immunofluorescence) of human myocardial samples as a diagnostic test for ARVC to be highly specific and sensitive [9]. This is considered a new diagnostic test for ARVC.

The precise guidelines are unavailable for the treatment of ARVC. The decision to treat the patients whether with β-blockers or anti-arrhythmic drugs or an implantable cardio-defibrillator (ICD) is still hard to find because of the unpredictable long-term outcome of ARVC. The therapies are guided based on clinical experience. Stable patients with ventricular arrhythmias are usually given an anti-arrhythmic class of drugs like amiodarone, sotalol, etc. alone or in combination. For patients with life-threatening ventricular arrhythmias, catheter ablation and ICD are used after empirically treatment with anti-arrhythmic drugs [3]. For patients who have progressed to severe right or biventricular dysfunction, treatment consists of diuretics, angiotensinogen converting inhibitors, and digitalis for heart failure, with an ultimate option for heart transplantation.

Our patient had only palpitations as the chief complaint. There were no marked ECG findings at the beginning except for ventricular premature contractions. The typical ‘T’ wave inversion or Epsilon waves were not present in ECG. He had not any significant family history. It was an incidental finding in our center. We considered the diagnosis of atypical AVC based on Holter monitoring and minor cardiac MRI findings.

The limitation we encountered was that we could not do adequate follow-up with the patient.

Conclusions
ARVC is a rare disease with variable presentations. The majority of the cases are asymptomatic which makes the diagnosis a difficult one. Our case had minimal symptoms and minimal findings, though we considered it as an atypical AVC on the basis of Holter and cardiac MRI findings. As it has been traditionally named as right ventricular cardiomyopathy, various cases have sprouted by involving the left ventricle also as evidenced in our case too. Despite not having a family history and any other predisposing factors for ARVC, it is necessary to consider ARVC as a differential in order to prevent sudden cardiac death. It helps to understand the wider variations that ARVC can present and enables us to have a broader view to clinch into the diagnosis.