Copyright: © © Saad B 2020 This is an open-access article distributed under the terms of the Creative Commons Attribution License, which permits unrestricted use, distribution, and reproduction in any medium, provided the original author and source are credited.

Abstract
Appendiceal mucocele is rare, observed on 0.2 to 0.6 % of appendicectomy peaces. Average age is about 50 to 60 - year-old with female predominance. Causes of appendiceal mucocele are multiple. Histologically, lesions are limited to mucosa. Treatment is based on surgery by classical appendicectomy with eviction of cellular dissemination. Prognosis of benign cases is excellent after complete resection with 5 years survival of approximately 100 %.

We report the case of a 54-year-old woman, menopaused, presenting isolated chronical pelvic pain and after all investigations, the diagnosis was found during the intervention and histopathological examination had confirmed appendiceal mucocele.

Introduction
Appendiceal mucocele is a rare entity that is characterized by cystic dilatation in the lumen of the appendix. The diagnosis is often made based on clinical signs and symptoms of acute appendicitis or coincidentally via imaging methods when it is asymptomatic. However, it may rarely receive a definitive diagnosis before surgery despite all technical possibilities, and it may be encountered during abdominal surgery performed for another indication. 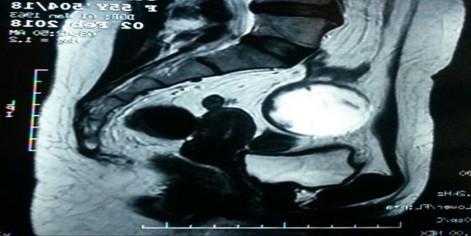 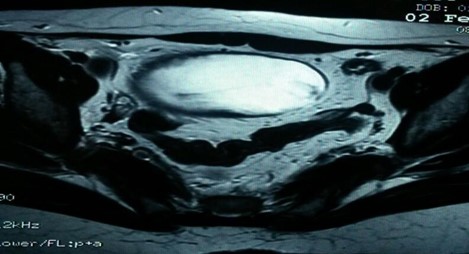 The patient has undergone diagnostic laparoscopy revealing an appendiculus mass measuring 12cm of the major axe. Surgical intervention has been converted to laparotomy with appendicectomy (Figures 3-4). 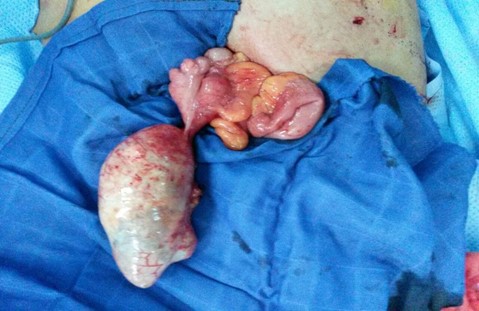 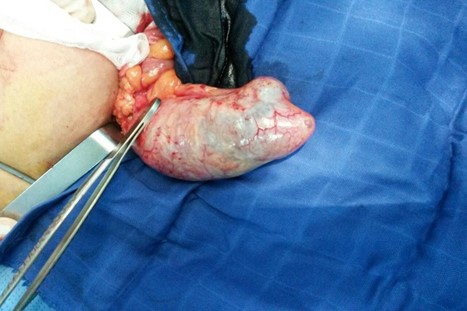 Discussion
Appendiceal mucocele is a descriptive term referring to distention of the appendix with mucus, which develops secondary to mucinous cystadenoma (63 %), mucosal hyperplasia (25 %), mucinous cystadenocarcinoma (11 %) and retention cysts (1 %) of the appendix lumen [1]. Mucocele may also develop when the lumen is obstructed due to endometriosis or carcinoid tumors.

It is reported that the incidence of appendiceal mucocele in appendectomy specimens is 0.2 - 0.3 % [2]. Patients are generally above the age of 50, and it is 4 times more common among women [3]. Approximately 25-30 % of the patients are symptomatic, and it is incidentally identified during radiological studies, endoscopic examinations, or surgery [2,4]. The most frequent manifestation among patients with symptomatic appendiceal mucocele is acute or chronic lower right quadrant pain [3].

The mass may be palpated in the lower right quadrant in approximately half of the patients [5]. Other symptoms include nausea, vomiting and change in bowel habits [6]. It is difficult to correctly diagnose appendiceal mucocele before surgery due to non- specific symptoms [7]. Ultrasonography (US) and computerized tomography may aid in diagnosis. It is generally hypoechogenic in US; however, echogenicity may also be seen depending on the number of acoustic interfaces caused by the mucus. The onion skin- like appearance is specific for appendiceal mucocele [8]. Computerized tomography (CT) is more sensitive in recognizing and assessing appendiceal mucoceles. In CT, it is observed in the form of a cystic, encapsulated mass with a thin wall, which sometimes has mural calcifications, in the localization of the appendix [9].

The treatment for appendiceal mucocele is surgery. Surgery may be performed via laparoscopy or laparotomy. It is important to be aware of the mucocele pre-operatively, and to avoid any manipulations during surgery, which may result in cystic rupture or leakage of the cystic fluid, because a potential rupture during surgery may cause pseudomyxoma peritonei. The 5-year survival rate with pseudomyxoma peritonei due to mucinous cystoadenocarcinoma may be as low as 20% [12]. Therefore, there are some publications which oppose the use of laparoscopy in surgery for mucocele, while there are other publications emphasizing that laparoscopic surgery can be successfully performed [13,14]. The reported case results and literature indicate that there are no contraindications for laparoscopic surgery in appendiceal mucocele. However, caution should be exercised to prevent its rupture during laparoscopy [14,15].

Conclusion
Appendiceal mucocele is a rather rare entity and it does not have a specific clinical presentation. Therefore, it is not considered as part of the differential diagnosis of lower right quadrant pain, and it is difficult to reach a pre-operative diagnosis. Appendiceal mucocele should be considered especially in cases where an elderly woman is observed to have a mass with atypical appearance in US or a mass is identified in the right iliac fossa. For this group of patients, laparoscopic excision performed with care following diagnostic laparoscopy may be a good option. Mucocele may often be associated with a concomitant colon cancer. Surgeons should always remember this and follow-up the patient.