Copyright: © © 2021 Rabia Hammad. This is an open-access article distributed under the terms of the Creative Commons Attribution License, which permits unrestricted use, distribution, and reproduction in any medium, provided the original author and source are credited

Abstract
Endometrial Stromal Sarcomas are a very rare uterine malignancy and being its rarity most of the information available in literature retrieved on the bases of small series or case reports. A pre-operative diagnosis is very difficult, and diagnosis is only confirmed postoperatively based on histopathology. The common presentation is abnormal vaginal bleeding, abdominal mass, and lower abdominal pain. Diagnostic clues can be obtained by endometrial sampling, ultrasound, and Magnetic resonance imaging. The main line of management is a total abdominal hysterectomy and bilateral sapling-oophorectomy and if diagnosed early, the five-year survival rate in the low-grade tumors is greater than 90 percent. In this case report, we present a case of low-grade endometrial sarcoma which was initially diagnosed as uterine fibroid, but post-operatively diagnosis was made endometrial stromal sarcoma on histopathology.

Introduction
Endometrial stromal sarcoma is an extremely rare uterine malignancy accounting for 0.2 percent of all uterine neoplasms and 7-25 % of all uterine mesenchymal tumors [1]. It tends to affect younger women and the mean age is 42-58[2]. It is the second most common mesenchymal neoplasm after Leiomyosarcoma [3].

WHO has categorized them into four separate entities:

The exact pathogenesis is yet to be determined. However, exposure to tamoxifen, unopposed estrogen, and polycystic ovarian disease seems to play an important part. [6] Despite its rarity, it must be kept as a differential in cases with the presentation of rapidly enlarging fibroid uterus. The most common presentation involves vaginal bleeding, pelvic pressure, and lower abdominal pain [7]. 25 % of females are asymptomatic, abnormal uterine bleeding occurs in 90 % of the women and 70 % women show a uterine enlargement.

However, 30-50 % of women may show extra-uterine spread at the time of diagnosis [2]. Endometrial Stromal Sarcoma may prove to be very similar to normal endometrium which might make it impossible to diagnose with certainty on curettage fragments. Therefore, a definitive diagnosis can only be made using a hysterectomy specimen. MRI can prove to be an important tool for preoperative diagnosis. The presence of low-intensity bands within the area of myometrium invasion can suggest the presence of ESS on imaging [8].

The most important prognostic factor is staging of the tumor, followed by the patient’s age and uterine morcellation [9]. Prognostic factors such as mitotic rate, evidence of p53, and tumor necrosis have been explored with varying outcomes [10]. Total abdominal hysterectomy with bilateral salpingo-oophorectomy remains the standard treatment. The efficacy of adjuvant therapy is still unclear with varying outcomes [8]. The presence of estrogen and progesterone receptors makes hormonal therapy an effective form of treatment.

Case Report
A 47 years-old Asian woman, P6+2, presented with irregular vaginal bleeding and lower abdominal pain for the last three months. The flow was heavy with the passage of clots. She menstruated 8-10 days after every 7-10 days interval with complaints of weakness and breathlessness. She had no associated co-morbid and did not give a family history of malignancy. Pap’s smear done 1 year back was negative for intraepithelial lesion or malignancy. On examination, she looks pallor. The abdomen was soft and non-tender. Per speculum examination, the cervix was healthy looking. On per-vaginal examination, the uterus was enlarged to 10 -12 wks. size, soft in consistency, mobile, non-tender with no adnexal mass or tenderness. On examination, her hemoglobin was 5.4 gm. /dl. Ultrasound showed hypoechoic mass measuring 6 x 5 cms. at the uterine fundus suggestive of fibroid and endometrium measures 8 mm and 5 mm at different sites. Ovaries were normal. After correction of anemia by packed cells transfusion Total abdominal hysterectomy with bilateral salpingo-oophorectomy was performed. Intraoperative findings- uterus enlarged to 10-12 weeks size with a smooth surface and soft inconsistency. Both ovaries were healthy looking. Cut section of the uterus showed a mass of 7 x6 cm in size filling the uterine cavity (Figure.1). Histopathological examination showed tumor size 6.5x5.5x3.8 cms. at the uterine fundus. Microscopically Spindled tumor cells with scant cytoplasm and minimal atypia are seen (Figure.2). These Mitotic changes were suggestive of low-grade endometrial stromal sarcoma, invades less than 50 % of the myometrium. The tumor was 1 cm away from the deep serosal margins. The depth of myometrium invasion was 0.5 cm. Cervix, bilateral adnexa, bilateral parametria, and both ovaries were free of tumor invasion. The post-operative period was uneventful, and patient was discharged on 3rd postoperative day. MRI done postoperatively revealed no lymphadenopathy and no evidence of metastasis. She did not require chemotherapy and radiotherapy. 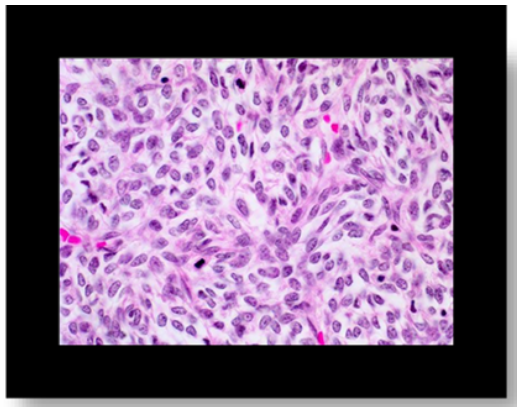 Discussion
Endometrial stromal sarcoma is a rare uterine malignancy of mesodermal origin that resembles the proliferative phase of endometrial stromal cells. They contribute 2-6 % of uterine malignancies. Endometrial stromal sarcoma tends to affect younger women and the mean age is 42-58[2]. Presentation is usually non-specific i.e., abnormal uterine bleeding, abdominal mass, and lower abdominal pain. Early diagnosis is essential for patient survival because it is directly related to the stage of the disease. Risk factors and pathogenesis are still unclear. In a study by Masnad et al. [11], Clinical information and pathology material was reviewed in 63 cases of extrauterine ESS, and he found that in 60 % there was an association with endometriosis. This may explain the presence of ESS outside the uterus tissue, however in our case and six other reported cases of Low Grade -ESS no association with endometriosis was found. The patient has commonly undergone surgery with a primary diagnosis of uterine leiomyoma or pelvic mass. Our findings are like those reported earlier in the literature [12, 13]. Our patient presented at the age of 47 years with abnormal uterine bleeding and lower abdominal pain. Whereas in other cases reported age is younger [13] and older in [14] Ultrasound findings suggestive of uterine fibroid. A high index of suspicion should be raised for pre-operative diagnosis of endometrial stromal sarcoma particularly in those patients who are presented with irregular uterine bleeding leading to severe anemia and ultrasound findings of the enlarged uterus with uterine fibroids. Surgery is the main line of management that is Total abdominal hysterectomy with bilateral salpingo oophorectomy. Due to a high risk of recurrence even in cases of low-grade ESS most gynecologists are used adjuvant chemotherapy, radiotherapy, or hormonal therapy to reduce the local recurrence. Surgical staging is the only way by which we can determined prognosis regarding recurrence and survival in LG-ESS.

Conclusions
Endometrial stromal sarcoma is a rare malignant tumor of the uterus confirmed mostly on histopathology. High index of suspicion should be made in rapidly enlarging uterus and irregular bleeding. A clear understanding of the disease, a high index of suspicion and the use of diagnostic modalities will bring a comprehensive clinical impact in the treatment of such rare malignant cases and these are the keys that increase the survival of patients.