Copyright: © © 2021 Hasan Aydın. This is an open-access article distributed under the terms of the Creative Commons Attribution License, which permits unrestricted use, distribution, and reproduction in any medium, provided the original author and source are credited.

Abstract
Bone, lungs, liver, and brain were the most frequent sites of metastasis of breast cancer. In this case, we present a rectum, Gastrointestinal system(GIS) metastasis of the breast cancer which was very rare and infrequent. 61 years old female who was diagnosed and treated as invasive lobular carcinoma(ILC) T1N3M0 16 years ago, had a complaint of tenesmus for 6 months. After MRI, Colonoscopy, and histopathology yields, Rectum metastasis of ILC was confirmed. As a result, ILC metastasis of GIS and rectum should be included in the differential diagnosis of patients with prior breast cancer history and with atypic MRI findings for primary colorectal cancer.

Case report
A 61-year-old female with a complaint of tenesmus for 6 months, was admitted to the Gastroenterology department and had a history of ILC with radical mastectomy performed 16 years ago. ILC with ring cell pleomorphic differentiation and   T1N3M0   staging was confirmed histopathologically. Tamoxifen was administered for 5 years (Between 2003-8) and Zoladex for 2 years (2006-8). The tumor was 4 cm in size and revealed an extra-capsular spread. 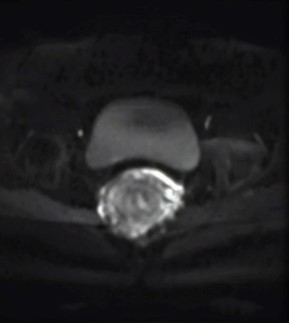 Figure 1: In the axial FS-T2W sequence; Rectal mass was slightly hyperintense with a heterogenous appereance.

Figure 2: In the FS-T1W contrast-enhanced sequence, Mass was hyperintense with heterogeneous enhancement, invaded all rectal walls, and protruded to the perirectal fat plains No extra-mural vascular invasion was found out with a couple of lymph nodes in the pre-sacral interval, not exceeding 5 cm in size.

In the left adnexal region, a 5.5 cm well-circumscribed cyst with invisible thin Wall enhancement was seen. A lytic metastatic bone lesion was identified in the L5 vertebral corpus, PET-CT revealed high FDG-18 uptake in this lesion (SUV max.5.5) and also high uptake in the rectum(SUV max 6.0). No more hypermetabolic foci in the body, regarding malignancy, was not identified in this PET-CT.

In the histopathologic examination; Atypic cells with a hyperchromatic nucleus and infiltrative eosinophilic cytoplasm were discovered in the rectal mucosa and serosa. In the immunohistochemical essay; PanCK (+), LCA (-), CD79a (-), CDX2(-), Mammoglobin (+) and ER (+). Histomorphologic findings were consistent with metastasis of breast cancer (Figure 3). 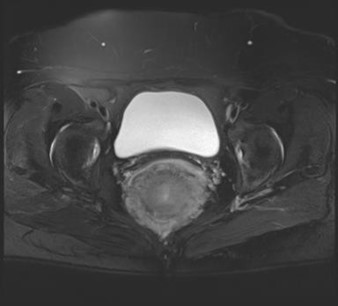 Figure 3: In the sagittal T2W sequence, Mass was iso-hyperintense and invaded mostly the posterior Wall of rectum and predicted luminal narrowing.

Discussion
The most common breast cancer was invasive ductal ca., but nevertheless, ILC had increasing incidence(1-3).ILC was mostly seen between 57-65 years of age [2,3,5]. The most common sites of metastasis of ILC were bones (% 65), lung (% 31.4), liver (% 26), and brain (% 8.5), at least % 33.5of all lobular ca. presented multiple organ metastasis [3,4]. The most common invaded bones were Vertebral corpus, bony pelvis, femur, and humerus [5]. In our case, a lytic sclerotic metastatic lesion was discovered at the L5 vertebral body. GIS metastasis of breast cancer was extremely rare and mostly to the stomach, small intestine, and colon [6]. GIS metastasis of ILC was higher than invasive ductal ca. (% 8-14) [1-3,7].

In our case, different MRI findings in the rectum were found out that was not consistent with Rectum ca; A colonic mass that invaded all rectal walls with diffuse and/or concentric patterns, and to our experience, this appearance might belong to Colonic lymphoma or inflammatory bowel diseases, but however, this mass revealed restricted diffusion and low ADC levels revealed hypercellularity. GIS metastasis of breast cancer was the first diagnosis after MRI and DWI-ADC imaging results in addition to the ILC history and radical mastectomy. Lau et al[11] also presented the same results in their ILC case.

As a result; Rectum metastasis of breast cancer was extremely rare and in our case, She had a radical mastectomy 17 years ago with prior ILC diagnosis regarded rectal mass lesion which was consistent with ILC metastasis and confirmed histopathologically. Lytic and sclerotic L5 vertebral bone metastasis was also discovered after 17 years.