Copyright: © 2022 Avinash V. This is an open-access article distributed under the terms of the Creative Commons Attribution License, which permits unrestricted use, distribution, and reproduction in any medium, provided the original author and source are credited.

Abstract
Dyskeratosis congenital (DC) is an inherited bone marrow failure and cancer predisposition syndrome caused by defects in telomere biology. The most frequent solid tumors were head and neck squamous cell carcinomas, followed by skin and anorectal cancer. The pediatric age group often presents DC as a multisystem disorder. However, to date, there has been no comprehensive quantitative analysis of cancer risk in Dyskeratosis Congenital. Since our patient is a case of Malignancy, multimodality management is required, which involves Radiation Oncology, Hematology, Medical Oncology, and Otorhinolaryngology. Proper counseling and a multidisciplinary team approach are essential to treat a case of Malignancy, especially congenital Dyskeratosis.

Introduction
Dyskeratosis congenital (DC) is an inherited bone marrow failure and cancer predisposition syndrome caused by defects in telomere biology [1]. The exact prevalence of Dyskeratosis genetic is unknown. It is estimated to occur in approximately 1 in 1 million people. The consequences of DC affect all body systems; these may include the diagnostic triad of abnormal nails, reticular skin pigmentation, and oral leukoplakia; bone marrow failure, pulmonary fibrosis, liver disease, neurological and ophthalmic abnormalities, as well as increased risk of cancer also occur [1]. The most frequent solid tumors were head and neck squamous cell carcinomas, followed by skin and anorectal cancer [2]. There is the presence of an excessive telomere shortening in this patient population, which in the absence of deoxyribonucleic acid (DNA) damage response, may lead to genomic instability and a predisposition for malignant transformation. The pediatric age group often presents DC as a multisystem disorder.

In contrast, adult patients generally offer a very variable phenotype, not necessarily with the classical features of DC. Being a carrier of telomerase mutations usually acts as a risk factor [3]. Since it is a multisystem disorder multidisciplinary team approach is often required for management.

Case Report
A child aged 16 years came with complaints of pain in the throat for 1 month. History of weight loss – non-quantifiable, history of decreased intake of food. The patient also gives an account of a change in voice for 1 month. Complaints of noisy breathing while eating. The patient is the firstborn of second-degree consanguineous marriage. No known medical co-morbidities. The patient has no significant family or personal history. A clinical examination from Head to toe shows abnormal nails and reticular skin pigmentation all over the body, and he is diagnosed with a typical condition known as Dyskeratosis congenital. Proper neck examination offered a 6 X 7 cm node in the mid and lower jugular region, which is matted, with tenderness present, and examination of the left neck is normal. On Video, direct laryngoscopy shows a lesion arising from Pyriform fossa B/L Aryepiglottic folds, more likely Malignancy arising from? Hypopharynx.

Diagnostic Assessment
USG Neck shows Evidence of a heterogeneously hyperechoic conglomerate matted mass lesion measuring 2.5 X 4.5 X 2.9cm and approximately 0.4cm deep to the skin surface noted in levels II & III on the right side. Another heterogeneous hyperechoic conglomerate matted mass lesion measuring 1.4cm X 1.3cm and approximately 0.6cm from the skin surface was noted in level III on the left side. FNAC from the right side of the neck shows Metastatic Squamous Cell carcinoma. 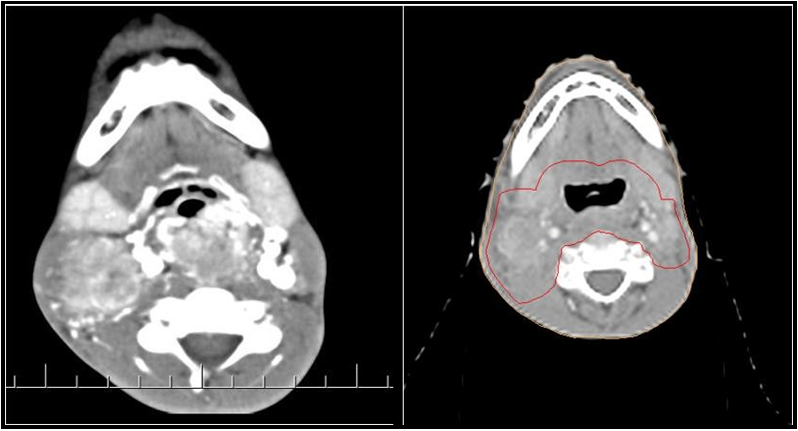 Therapeutic intervention
After giving proper counselling about the disease & treatment, the patient underwent Percutaneous Endoscopic Gastrostomy under short General Anaesthesia as the patient had to swallow difficulty and then started on Definitive Radiation therapy to the Gross tumor involving hypo pharyngeal region and involved gross nodes. The patient was planned on a 6 MV Linear Accelerator with Intensity Modulated Radiation Therapy with a dose of 70Gy (Gray) in 35#(Fractions) over 6.5 weeks. The patient tolerated the Radiation Therapy well. Chemotherapy was Withheld given Age and Dyskeratosis Congenital. Reactions and Side effects were managed effectively during the course of treatment.

Results
The patient underwent a complete course of radiation therapy. Reactions and side effects were managed symptomatically. The patient was asked to review after 1 month for follow-up. On 1 month follow up patient complained of odynophagia and palpable cervical lymph nodes. The patient was referred to the ENT department for Video Direct Laryngoscopy, and it showed no abnormal or residual disease USG Neck showed conglomerate lymph node mass with loss of fatty hilum of size 4x2.7x1 cms noted in Right Level II, 2.2X 1.2X0.5cms in Left Level II, 0.4X0.4mm node in Right Level IV. The patient has been put on Antibiotic coverage and asked to review for a 6-month follow-up. On 6-month follow-up, a patient complained of Difficulty in swallowing and multiple palpable cervical lymph nodes, and on examination, there was a growth arising from the stroma site of a Feeding tube. The patient was advised for PET-CT for whole body evaluation and showed Increased.

Discussion
Dyskeratosis congenital (DC) is a rare multisystem bone marrow failure syndrome with marked clinical and genetic heterogeneity. X-linked recessive, autosomal dominant, and autosomal recessive forms of the disease are recognized. The gene mutated in the X-linked form of the disease is DKC1. The DKC1 -encoded protein, dyskerin, is a component of small nucleolar ribonucleoprotein particles, which are essential in ribosomal RNA processing, and of the telomerase complex. The autosomal dominant form of DC is due to mutations in the gene for the RNA component of telomerase [4]. The link between Dyskeratosis Congenital and cancer is particularly intriguing because DC is associated with defects in telomere biology. Patients with Dyskeratosis Congenital have very short telomeres, and mutations have been identified in telomere biology genes.

However, to date, there has been no comprehensive quantitative analysis of cancer risk in Dyskeratosis Congenital [2]. There is an increased risk for squamous cell carcinoma and haematolymphoid neoplasms. Approximately 90 % of patients exhibit nail dystrophy, which affects the fingernails first and then the toenails in most cases. Mucosal leukoplakia is a pathognomonic feature and occurs in approximately 80 % of patients. In childhood, Bone Marrow Failure is the most frequent complication of Dyskeratosis Congenital, whereas pulmonary fibrosis is a frequent cause of adult mortality. The skeletal, gastrointestinal, and genitourinary systems also may be affected. DC is a multisystem disorder, so it is essential to monitor many systems of the body. A lot of studies and literature are there regarding the treatment of Dyskeratosis congenital. Since our patient is a case of malignancy, multimodality management is required, which involves Radiation Oncology, Hematology, Medical Oncology, and Otorhinolaryngology. Proper counselling and a multidisciplinary team approach are essential to treat a case of malignancy, especially Dyskeratosis congenital.

Conclusion
Dyskeratosis congenital is a rare genetic disorder. Bone marrow failure is the most common cause of death in children. Malignancy is a troublesome problem in patients suffering from Dyskeratosis congenital. Since it is a Congenital disorder, it is advised that all siblings of the affected patient should undergo Genetic screening, and parents should be counselled on the same and the need for early management.