Copyright: © 2022 Seda Yılmaz. This is an open-access article distributed under the terms of the Creative Commons Attribution License, which permits unrestricted use, distribution, and reproduction in any medium, provided the original author and source are credited.

Abstract
Purpose:
Kikuchi-Fujimoto's disease (KFD) is a rare, idiopathic, and usually self-limiting condition with an unclear etiology. It is characterized by fever and cervical lymphadenopathy, requiring a lymph node biopsy to establish an exact diagnosis. KFD has rarely been reported in association with systemic lupus erythematosus (SLE), occurring either before, concurrently, or after the onset of KFD.

Methods and Results: Herein, we report a 19-year-old male patient with fever and lymphadenopathy who subsequently developed autoimmune hemolytic anemia and renal failure.

Conclusion: Determining the relationship between KFD and SLE is of clinical importance in initiating early and intensive immunosuppressive therapy. Patients should be followed for relapses or development of SLE for several years.

Introduction
Kikuchi-Fujimoto's disease (KFD) is a rare, idiopathic, and usually self-limiting condition of an unknown etiology [1]. It is characterized by fever and cervical lymphadenopathy, and the exact diagnosis requires a lymph node biopsy. Despite clinical and histological similarities to systemic lupus erythematosus (SLE), tuberculosis, and lymphoma, KFH should be differentiated from these conditions since the prognosis and management differ dramatically. Also, KFH and SLE may rarely occur in association with each other, with a diagnosis of KFH established before, concurrently, or after a diagnosis of SLE [2,3]. 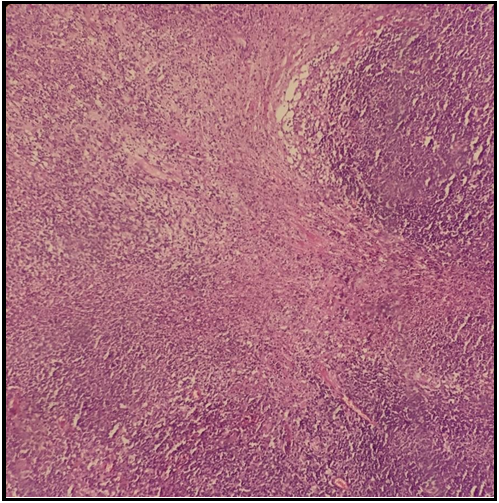 A diagnosis of KH was made based on fever, lymphadenopathy, and biopsy-confirmed necrotizing lymphadenitis. During the course of the diagnostic work-up, an increase in creatinine (2.9 mg/dl) and indirect bilirubin and a decrease in haptoglobin (< 8 mg/dl) and hemoglobin (5.4 g/dl) occurred. The Coombs test was positive, and 24-hour urinary protein was 430 mg/day. The antinuclear antibody (ANA) titer was 1/1000, with positivity exhibiting a homogenous and granular pattern. Anti-ds DNA antibody and anti-cardiolipin IgM were positive. C3 (0.6 g/L, normal: 0.9-1.8) and C4 (0.06 g/L, normal: 0.1-0.4) were significantly reduced, while direct and indirect Coombs tests were negative. Also, a diagnosis of SLE was made based on ANA, anti-ds DNA, anti-cardiolipin antibody positivity, hemolytic anemia, lymphopenia, urine findings, elevated creatinine, and reduced complement levels. A renal biopsy was scheduled but not performed due to the patient's refusal. For management, monthly pulse cyclophosphamide and high-dose methyl-prednisolone were commenced due to renal involvement. The treatment resulted in the normalization of creatinine and the elevation of hemoglobin levels.

Discussion
Kikuchi's disease, also known as Kikuchi-Fujimoto disease or Kikuchi histiocytic necrotizing lymphadenitis, is a benign and usually self-limiting type of histiocytic necrotizing lymphadenitis. Patients may present with lymphadenopathy, fever, myalgia, arthralgia, and, more rarely, hepatosplenomegaly. Although it has been associated with SLE, it tends to follow a benign clinical course with spontaneous remission expected to occur within four months.

Its pathogenesis remains unknown. The immune responsivity of the T cells and histiocytes has been proposed to occur in these patients based on its clinical presentation, course, and histological changes. Also, Epstein-Barr virus (EBV), human herpes virus 6, human herpes virus 8, human immune deficiency virus (HIV), parvovirus B19, paramyxoviruses, para-influenza virus, yersinia enterocolitica, and toxoplasma have been implicated [4-9].

Although initially described in female patients, it may also occur in males with a female-to-male ratio of approximately 4 to 1 [10].

In a retrospective study of 244 KFH patients, the most common symptoms included high fever (35 %), fatigue (7 %), and joint pain (7 %) [11], while the most common clinical and laboratory signs were lymphadenopathy (100 %), rash (10 %), arthritis (7 %), hepatosplenomegaly (3 %), leukopenia (43 %), elevated erythrocyte sedimentation rate (40 %), and anemia (23 %). Lymph node enlargement is generally moderate (1 to 2 cm in diameter), while some patients may have larger lymph nodes (≤ 7 cm). Typically, lymph nodes are complex, discrete, mobile, and have a smooth surface [12]. Blunt or acute pain may commonly occur with lymph node enlargement [12]. On the other hand, fever, lymphadenopathy, splenomegaly, and hepatomegaly have been reported to occur in 36 %, 7-16 %, 5 %, and 2 % of patients with SLE, respectively. Our patient had a fever, lymphadenopathy, hepatosplenomegaly, and anemia. The diagnosis of KFH is based on lymph node biopsy showing the presence of histiocytic cellular infiltration. KFH and SLE share specific histological characteristics, and the tubuloreticular structures observed in the lymphocyte, and endothelial cells in SLE patients have some resemblance to those in Kikuchi disease. SLE- specific antibodies, hematoxylin bodies, and vasculitis in lupus lymphadenitis are assistive in the differential diagnosis [13, 14, 15]. In our case, the absence of hematoxylin bodies, as well as the absence of significant vasculitis, pointed away from a diagnosis of SLE lymphadenopathy.

Currently, there are no effective therapeutic strategies for KFH, with a usual resolution of signs and symptoms within 1 to 4 months. Patients should be followed-up for several years for relapses or the development of SLE. Monthly pulse cyclophosphamide plus high-dose methylprednisolone were used to treat our patient after a diagnosis of SLE was made. In the subsequent course of his condition, creatinine levels were normalized, and hemoglobin levels were increased. Identifying the association between KFH and SLE is of clinical significance in initiating early and intensive immunosuppressive therapy.

Conflicts of interest: The authors certify that there is no conflict of interest with any financial organization regarding the material discussed in the manuscript.