Copyright: © 2022 Victoria Al Karaki. This is an open-access article distributed under the terms of the Creative Commons Attribution License, which permits unrestricted use, distribution, and reproduction in any medium, provided the original author and source are cred

Retropharyngeal Abscess in Children: An Uncommon Presentation of a Central Skull Base Osteomyelitis Secondary to A Subclinical Tonsillitis

Abstract
Central skull-base osteomyelitis (CSBO) is a life-threatening condition that requires emergent intervention. Retropharyngeal abscesses should also be addressed as early as possible since mortality increases in the setting of airway compromise and oropharyngeal narrowing. Retropharyngeal blemish's clinical symptoms are generally non-specific, including fever, neck swelling/pain, drooling, swallowing difficulties, and the most common presentation is bulging of the posterior aspect of the oropharyngeal wall in 37 % of cases. Headache is a prevalent chief complaint of the adult population in the emergency department, whereas it is rarely reported yet should be aggressively addressed when it comes to children under 10 years of age. Authors herein describe a retropharyngeal abscess with central skull base osteomyelitis in a girl of 7 who presented with progressive headache and neck pain. We underline the importance of pushing for imaging in a child of 7 years of age able to exhibit the symptom of headache. Children are usually challenging to understand, especially for their limited ability to explain symptoms. So, when a child can describe a complex symptom such as a headache, he should be taken seriously, especially in the emergency care setting, and indeed, emergency care providers should ask for further imaging. CT scan with IV contrast is the ultimate modality to diagnose an abscess in the emergency department.

Introduction
Background
Central skull-base osteomyelitis (CSBO) is a life-threatening condition that requires emergent intervention [1]. Retropharyngeal abscesses should also be addressed as early as possible since mortality increases in the setting of airway compromise and oropharyngeal narrowing [2]. Thus, identifying these two entities in the emergency care setting is imperative and should always be kept in mind in the pediatric population. Prompt diagnosis is essential and radiological modalities contribute significantly [3]. Management consists of rapid administration of intravenous antibiotics with debatable surgical drainage to optimize outcomes [3].

CSBO is more common among middle-aged males with diabetes and immunosuppression as risk factors. It is usually a complication of external otitis media. Patients present with headaches, non-specific facial pain, and cranial nerve palsies (CN VI, IX, and X) [4]. The anatomical proximity of the clivus with the pharynx and its adjacent structures is a critical element in the expansion and spread of the infection [4].

Retropharyngeal abscess's clinical symptoms are generally non- specific, including fever, neck swelling/pain, drooling, swallowing difficulties, and the most common presentation is bulging of the posterior aspect of the oropharyngeal wall in 37 % of the cases [3]. Headache is a widespread chief complaint of the adult population in the emergency department, whereas when it comes to children less than 10 years of age, it is rarely reported yet should be aggressively addressed. We describe a reported retropharyngeal abscess with central skull base osteomyelitis in a girl of 7 years of age who presented with progressive headache and neck pain.

Case
This is the case of a 7-year-old girl, previously healthy, who presented with a four-day history of severe frontal headaches associated with nausea and neck pain. No fever, chills, dyspnea, dysphonia, respiratory distress, stridor, drooling, trismus, dysphagia, or odynophagia was reported. No rhinorrhea or post-nasal drip, no recent upper respiratory tract infection. History was only positive for symptoms of gastroenteritis twelve days ago, which self-resolved.

Her mother checked her temperature regularly and denied any episodes.

On Physical exam, the patient was breathing comfortably. She was alert and oriented to person, place, and time. She had decreased neck range of motion to the right side and upward. The rest of the head, neck and oral cavity exam was harmful: no palpable lymph nodes or masses, midline uvula with no palate bulge, grade 2+ tonsils, non- erythematous and non-exudative.

Laboratory tests, including complete blood count, a metabolic profile, and C-reactive protein (CRP), were positive for an elevated white blood cells count of 16,200/ cu.mm (absolute neutrophil count of 12,900/ cu.mm), a carbon dioxide level of 20 mmol/L and an elevated CRP= 80.2 mg/L. Given her presentation and the physical examination findings, a computed tomography (CT) scan of her brain and neck with intravenous (IV) contrast was done, which revealed the following:

After a multidisciplinary team consultation including Pediatric Infectious disease, Neurosurgery, and Otolaryngology, a decision was made to proceed with IV antibiotics, including Ceftriaxone (75 mg/kg/day, once daily), Vancomycin (15 mg/Kg/dose, every 6 hours) and metronidazole (30 mg/Kg/day divided every 6 hours) and a plan for surgical intervention for abscess drainage after the performance of a Magnetic Resonance Imaging (MRI) was set.

The patient was admitted to the regular pediatrics ward, MRI of the brain and neck without and with Gadolinium done the next day showed:

The following day the patient underwent surgical drainage of the abscess, and intra-operative cultures were taken however did not show any specific pathogen. She continued the course of antibiotics as instructed.

The patient was discharged home after 19 days to complete 3 months of IV antibiotics at home. Repeat MRI of the brain with and without Gadolinium at 6 weeks showed a near-complete resolution of the retropharyngeal abscess with improved surrounding osteomyelitis of the adjacent Clivus. 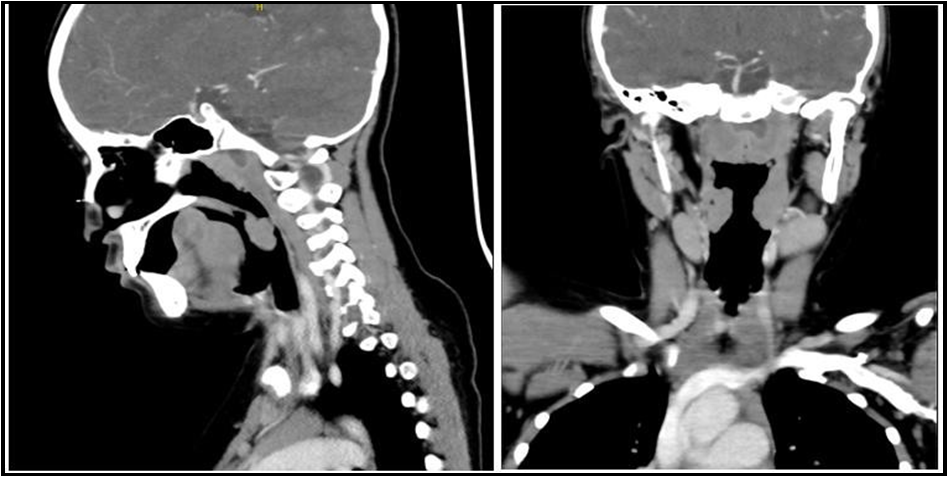 Discussion
We discuss an atypical presentation of retropharyngeal abscess with clivus osteomyelitis in a 7-year-old girl presenting with an unusual clinical symptom, headache. To the best of our knowledge, there is no reported case of children with retropharyngeal abscess spreading to the clivus who initially complained of headache and neck pain without fever.

Anatomically, the pharynx is the anterior structure of the retropharyngeal space [3]. The latter sets in the middle of two fasciae, naming the buccopharyngeal fascia anteriorly and posteriorly the prevertebral fascia. This deep neck space starts at the skull's base level and prolongs until the tracheal bifurcation. Two lateral compartments of retropharyngeal lymph nodes are identified, separated by a fibrous ridge (Space of Gillette). Communication with the para-pharyngeal space and the posterior mediastinum is continuous, and any contiguous infection may spread [3].

The clivus is a bony structure at the skull base described as the anterior gradual sloping part of the occipital bone at its junction with the sphenoid bone [6]. CSBO infections usually have an insidious course of weeks to months [1]. The temporal bone involvement secondary to a malignant otitis externa or a paranasal sinus infection is commonly seen with this condition [1]. Participation of the clivus with a retropharyngeal abscess is poorly documented in the literature. So, it is infrequent to see a CSBO in a child without an ear infection which emphasizes the novelty of our case.

In a systemic review, Johnson et al. differentiate between Skull base osteomyelitis (SBO) and CSBO. While SBO is described as a progression of otitis and malignant otitis externa, CSBO has no auricular etiology [4]. Patients presenting with CSBO have a headache, atypical facial pain, and cranial nerve palsies without auricular and nasal symptoms [4]. Leventhal et al. suggested a decrease in blood flow and oxygen delivery to bones secondary to conditions such as Paget disease, osteoporosis, anemia, malnutrition, malignancy, and radiation; as the pathophysiology of CSBO [5]. Although our patient was not investigated for other diseases during admission, the lack of any known medical and familial history and the absence of malnutrition and anemia on laboratory tests rule out most of these etiologies.

We underline the importance of pushing for imaging in a child at 7 years of age able to exhibit headaches. Children are usually complicated to understand, especially for their limited ability to explain symptoms. So, when a child can describe a complex symptom such as a headache, he should be taken seriously, especially in the emergency care setting, and certainly, we should ask for further imaging. As in adults, a foreign body-induced skull base infection and retropharyngeal abscess were once documented in an elderly with neck pain and headache by Park et al. in 2016 [5].

CT imaging with IV contrast is the ultimate modality to diagnose and adequately manage an abscess, especially in the emergency department [7]. It has a 75 % accuracy in detecting the spot after a review of 24 cases in pediatrics by Courtney et al. [7]. An MRI will help to investigate the surrounding soft tissues, muscles, and bones more extensively. Although an abscess on X-Ray can be evident, it has no additional value to a CT scan which is more specifically suggestive [7].

Declarations
Ethics approval and consent to participate were obtained. This study was approved by the IRB committee.

Consent to publish: An informed consent was obtained from the participant

Availability of data and materials: The authors do not have the right to share any data information as per their institutions policies.

Competing interests: The authors have no conflicts of interest to report.