Copyright: © 2022 D. Ian Paterson, MD. This is an open-access article distributed under the terms of the Creative Commons Attribution License, which permits unrestricted use, distribution, and reproduction in any medium, provided the original author and source are cre

Abstract
SMHeartCard is an on-person carriage device for ASA and Nitroglycerin for pre-hospital use at the onset of symptoms of myocardial infarction, designed to improve access and reduce the time from symptom onset to therapy. We present a case of an 86-year-old male with risk factors for coronary atherosclerosis, who used SMHeartCard at the onset of symptoms. His clinical course was excellent, with the maintenance of normal ejection fraction and absence of heart failure symptoms, and he remains well more than two years later. A case series of sixteen additional SMHeartCard users, compiled from post-marketing feedback to the manufacturer, suggests generally favorable outcomes in this population. In aggregate, these observations, and the well-defined advantages of rapid medical therapy for acute coronary events, suggest SMHeartCard can be used effectively by persons at risk of myocardial infarction.

Introduction
Canadian geography often hinders timely emergency care for myocardial infarction (MI) [1]. Approximately one-quarter of Canadians with myocardial infarction fail to survive long enough to reach the hospital, and this figure has improved only modestly in the past decade despite the increasing availability of automated defibrillators, a higher proportion of the population trained in cardiopulmonary resuscitation, and improved early response systems [2]. In particular, pre-hospital deaths are unchanged in people with cardiac risk factors experiencing their first myocardial infarction [2]. New approaches are needed to address this unmet medical need.

The initial treatment of suspected myocardial infarction is to chew and swallow acetylsalicylic acid (ASA) to inhibit platelet aggregation, and sublingual or buccal administration of nitroglycerin to vasodilate coronary arteries and reduce cardiac workload. Shortening the time to ASA improves survival [3], and studies suggest that NTG in the pre-hospital setting improves survival outcomes [4,5] as does early nitrate therapy in hospitals [6]. However, most people with an acute coronary event lack immediate access to these medications. Canadians with established coronary artery disease (CAD) do not routinely carry either nitroglycerin or ASA: in a prospective Canadian case series only 18 % of patients prescribed nitroglycerin carried it, and none had ASA. The most frequent explanation for the lack of compliance was the inconvenience of carrying nitroglycerin spray [7]. Furthermore, the median time for ASA administration after the presentation to a Canadian emergency department with MI was 90 minutes [8], suggesting significant delays from symptom onset to ASA and/or NTG therapy represents a missed opportunity to improve coronary event outcomes.

SMHeartCard is a device specifically designed to facilitate pre-hospital therapy for suspected myocardial infarction. SMHeartCard enables ambulatory carriage and immediate access to medications and simple instructions for administration of ASA and nitroglycerin for suspected cardiac chest pain. Each SMHeartCard has four 81 mg ASA and three Nitrostat 0.3 mg pills for on-person carriage. The card is small (64 x 42 mm) and thin (6mm) to fit in a wallet, pocket, or purse (Figure 1). The SMHeartCard tightly encloses the pills to minimize degradation and has been validated to ensure at least six-month nitroglycerin stability across temperatures ranging from -20° C to +60° C and in real-world conditions [9]. The card has clear instructions on the back to ensure the correct use of the medications at the onset of chest pain (Figure 1). The card is correctly and easily used by seniors without training [9]. It is recommended for people with risk factors for CAD, those with known CAD, and first responders to provide immediate treatment to those with symptoms of MI.

SMHeartCard is patented in several jurisdictions, has been available from pharmacies across Canada and from the manufacturer’s website (www.smheartcard.ca) since 2018, and recently obtained FDA clearance for sale in the USA where it is available for online purchase through Amazon Inc. Post-marketing surveillance information has accumulated (SMHeartCard Inc., data on file).

Herein, we present an index case report of an individual who used SMHeartCard at the onset of symptoms of myocardial infarction, for whom we have been granted access to medical records for confirmation. Furthermore, we follow this with a case series of sixteen individuals who provided unsolicited feedback and first-hand testimonials from SMHeartCard post-marketing surveillance. 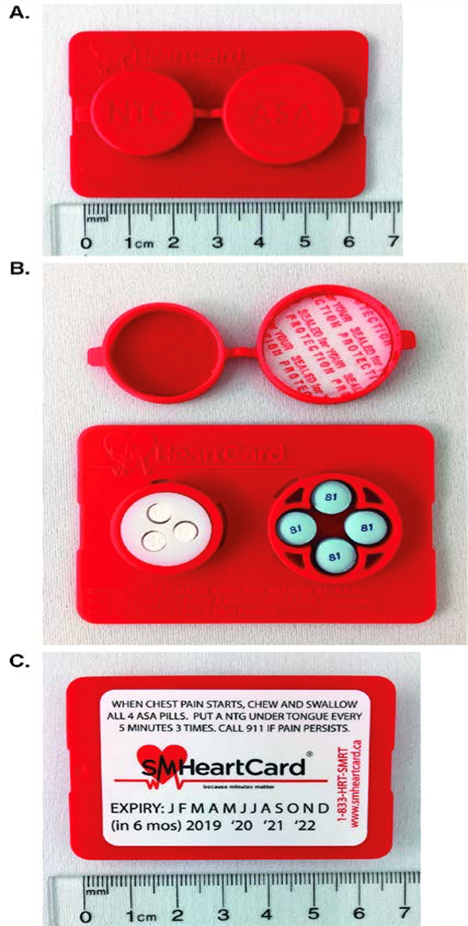 Case Report
The index case provided written informed consent to review medical records and publish this report.
An 86-year-old man with hypertension and dyslipidemia developed sudden onset chest pain radiating to his neck and back while attending a religious service with his wife. He left the service and ten minutes after the onset of symptoms opened the SMHeartCard and took 4 tablets of ASA 81 mg and 3 tablets of nitroglycerin 0.3 mg as directed by the SMHeartCard instructions on the back of the card. He had partial relief from his discomfort. Emergency medical services were activated, and an onsite 12-lead electrocardiogram revealed sinus rhythm, anterior ST elevation, and a new bifascicular block (Figure 2 panel A). He was transported directly to the cardiac catheterization laboratory of a tertiary hospital and ten hours after symptom onset a coronary angiogram revealed a protruding 70 % stenosis of the proximal left anterior descending coronary artery. He underwent successful angioplasty and stenting of this lesion and achieved an excellent result with TIMI 3 flow post-procedure. His mild to moderate lesions in his distal right coronary artery were managed medically. Following revascularization, a repeat electrocardiogram revealed anteroseptal Q waves and nearly complete resolution of his ST elevation and conduction abnormalities (Figure 2, panel B). Serum troponin I measured 3 hours post-procedure was mildly elevated to 2.64 ug/L (normal < 0.15 ug/L). A transthoracic echocardiogram performed on day 2 of admission found near-normal cardiac function, ejection fraction of 53 % (normal ≥ 55 %), and patchy anteroseptal and anterolateral wall motion abnormalities consistent with a reperfused myocardial infarction. During his hospital stay, the patient was also diagnosed with new-onset diabetes mellitus, hemoglobin A1c 7.0 % (normal ≤ 6.1 %), and was initiated on low dose metformin in addition to his dual antiplatelet treatment. He was discharged home on day 3 of admission and subsequently completed an 8-week cardiac rehabilitation program. He was seen in follow-up by his cardiologist at 3 months and 12 months from his cardiac event and reported a high level of physical activity with no recurrent chest pain.  A follow-up ECG at 3 months (Figure 2, panel C) revealed the resolution of his anteroseptal Q waves. He is now more than 2 years from his event and denies any cardiac symptoms. 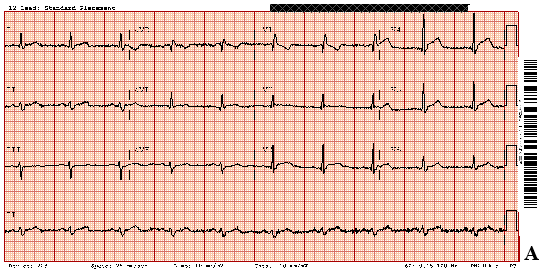 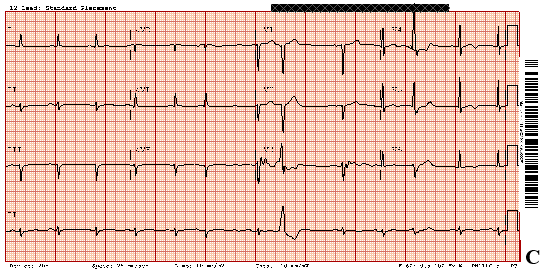 Case Series
SMHeartCard has received feedback from individuals and families where SMHeartCard was used. These sixteen individual reports were collated, tabulated, and analyzed (data on file, SMHeartCard Inc.). Although these reports did not include reviews of the primary medical records, and these data are subject to reporting bias and channeling, they provide real-world evidence of outcomes in the population using SMHeartCard.

Eleven males and five females reported using SMHeartCard. Their ages ranged from 55 to 92 years, with a median of 72 years. Thirteen cases involved individuals or family members administering the SMHeartCard; two cases involved first responders who provided emergency care to strangers, one of which completely relieved chest pain in a 76-year-old male with cardiac risk factors; this occurred three hours into an international flight to proceed to the final destination. Importantly, the flight emergency medical kit contained neither ASA nor nitroglycerin. Fifteen cases were confirmed to be an acute coronary event; one case was diagnosed as non-cardiac chest pain and that individual had no adverse reactions to the ASA or the nitroglycerin. Among the fifteen cardiac events, two individuals died during their hospitalization due to complications from their MI, and thirteen were reported to have coronary stenting or bypass with long-term good outcomes.

Our index case was an 86-year-old male with atherosclerotic risk factors but no prior coronary events. The patient used SMHeartCard ten minutes after the onset of symptoms in a public setting, and after coronary artery stenting, and had preserved cardiac function and no symptoms of heart failure.

We also report a series of sixteen additional individuals who used SMHeartCard at the onset of symptoms. Fifteen confirmed acute coronary events, and thirteen individuals reported good long-term outcomes; two individuals died during their initial hospitalization from complications of MI. Importantly, one report was of SMHeartCard use for non-cardiac chest pain, and the patient had no adverse reactions to the medications. We acknowledge the limitations and the potential for bias in this dataset and do not claim that these reports represent high-level evidence of efficacy. However, post-marketing and real-world evidence can identify safety concerns; none were identified in this study or have been reported to the company.

These results of pre-hospital ASA and nitroglycerin are consistent with expectations from the medical literature, where timely pre-hospital administration of sublingual nitroglycerin reduces chest pain [10] and is safe to use, with non-clinically significant hypotension in 0.7 – 3.2 % of patients [4,10]. The risk-to-benefit ratio of these medications being used in the pre-hospital setting for suspected acute MI or angina is highly favorable.

Conclusion
In summary, we report the use of SMHeartCard in seventeen individuals who experienced symptoms of myocardial infarction. The majority experienced favorable outcomes, and no adverse effects of pre-hospital ASA or nitroglycerin were reported. Because time to therapy is a key determinant of outcomes after MI, SMHeartCard has the potential to improve outcomes after acute coronary events by offering a pragmatic solution to the problem of rapid access to, and compliance with, emergency cardiac medications.